THE WILL OF THE PEOPLE PREVAILS 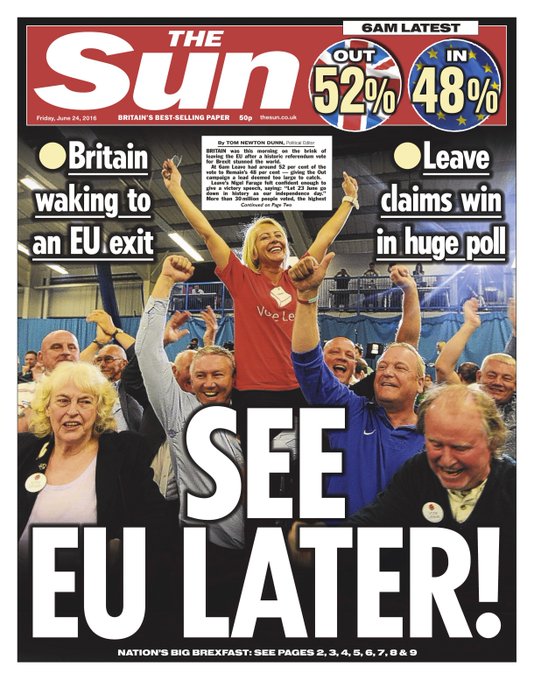 With more than two thirds of ballots now counted, the BBC forecasts that UK has voted to leave the European Union by 52% to 48%. This is a Great Day for Great Britain. Taking back their country and securing their future from the progressive socialists who have dictated how other countries are to behave. The New World Order has suffered a might blow here indeed.

UKIP leader Nigel Farage – who has campaigned for the past 20 years for Britain to leave the EU – told supporters “this will be a victory for ordinary people, for decent people”.

Mr Farage – who predicted a Remain win at the start of the night after polls suggested that would happen – said Thursday, 23 June would “go down in history as our independence day”.

Bringing to the attention of all Patriots that the English Christian voted overwhelmingly for “LEAVE.” Muslim areas went “REMAIN” by a wide margin. Thus the final vote was close, deducting the Muslim count manifested the dissatisfaction with most Britians that their country was being taken over by a political agenda foreign to democracy. Just last week, the Muslim Mayor of London, banned all advertising showing women in bikinis.

It was the start of the “Islamification” of London and said the mayor was adopting this policy because of his religious values. Sharene Kirchler said: “What happened to free speech? What happened to not being offended by everything. Why is it a matter of state to decide when something so subjective is to be allowed or not?”

THIS WAS A BIG LOSS FOR OBAMA WHO BACKED THE REMAIN CAMPAIGN. What is bad for Obama is good for America.

CLICK HERE FOR THE LATEST. The “LEAVE” vote bodes well for Trump in November. As usual the polls failed to see this decisive win.

What is a BLACK SWAN?

The black swan theory or theory of black swan events is a metaphor that describes an event that comes as a surprise, has a major effect, and is often inappropriately rationalized after the fact with the benefit of hindsight. The term is based on an ancient saying which presumed black swans did not exist, but the saying was rewritten after black swans were discovered in the wild.

The theory was developed by Nassim Nicholas Taleb.

The English have rejected socialism, have reject dilution, have reject Islamization. Great Britain will gain back their Independence from the “do gooders” who have destroyed Europe. This is a message to all of them. “Don’t xxxx with us.” We are no longer subservient to those who want to destroy the world.

What is the BREXIT? Why are people so adamant about Great Britain leaving the E.U. Do countries have to bow their sovereignty to a One World Order? taking orders from the liberal progressive do-gooders like Merkel who are tempting to erase the Aryan shibboleth. Is it tantamount to surrender? A Waterloo in the 21st century?

Mark our words, “BIG BEN WILL RISE AGAIN” despite the pounding they will receive from the E.U. and Obama. Let the games begin. Europe will once again see the true path to individuality where political correctness does not play a part. Lying politicians with no constituencies are the existential threat to Europe and the free world. Englishmen and women have recognized this growing ursurpation of their freedoms. Congratulations to them for they have seen the light. 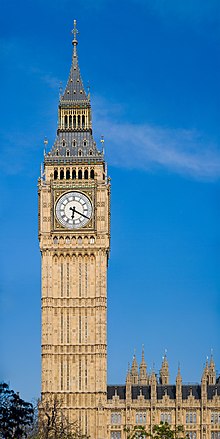 Then there is immigration. “There’s this feeling that we’re losing our cultural identity and our national identity,” Mr. Klaas said, “at the same time that there’s this influx of people who are willing to work for low wages.”

Gold has exploded, up $75, sliver shining too.. The pundits can’t nor are they willing to understand the attraction to gold;  steadfast has it been in an island of global turmoil. Uncertain on what will happen have caused many to insure themselves with the metal.

What have the naysayers missed? One wonders why they even mention gold at all. And the volcanic rise of Trump, stirring the debate, now the Yay Vote to leave the EU puts the politicians on notice. Their ways are criminal in many respects; the time has come to give them the heave ho. The pundits failed to see the forest from the trees.

The boxes of tea in our logo have names on them, Democrats, The Fed, Public Unions, Big Government and entitlements. Yes, Americans are FED UP too with do good politicians who only care about getting reelected.

We tell you what, America and the world is in turmoil. The socialists thugs running the paper printing scam are now worried about the next three years, we would not be surprised if some of them commit suicide. They are desperate to find a solution when none other than gold exists. They have dug their own grave and now will reap the benefit of disastrous monetary policies over the past 45 years.

During the past six months we have tried to educate the sceptics that the United States dollar is not worth the paper it is printed on.  The likes of Goldman-Sachs (with a name like Goldman, why would they be bearish on Gold – very confusing to us) forecast a $1000 ounce of gold, others saw an implosion to $500, not so fast says the market. When Goldman speaks people listen or do they? Today gold mounted a robust rally closing over $50 higher as it continues to close in on $1250 per ounce. In the last 30 days gold was as good as gold rising over $150.

To the naysayers out there, look what is happening in the world; in one word it is defined as TURMOIL. Globally people have lost confidence in their leaders – why do you thing Trump is doing so well and on the other side, Hillary the Liar, her momentum stopped dead in New Hampshire. Oh don’t worry she says, we are going South and the FBI, me worry. A little kick-ass by that Sanders fellow in the Palmetto State may be in the cards. Talking about the cards, Hillary then heads for Nevada – Ok Harry Reid is going to be shoveling the manure for Hillary, but what good will that do. Sanders may have a trick or two up his sleeve.

Anyway you look at it, oil tanking, zero interest rates and in some cases negative rates, one would think boom times are here. The average family is saving at least $1000 a year on gas, plus oil and natural gas to heat the abode. Doesn’t seem they are too anxious to spend the savings though. Europe on edge, suicide bombers perfecting their craft, Syria going down in flames. Latin America’s bargain with the devil is not working out so well; just ask the people in Venezuela. And we forgot to mention the dictator in North Korea, shooting his mouth off again. Guess he figures that do to his lack of manhood he would shoot off a missile. Lot of good that did.

Keep your hopes up, things can only get better.  The higher gold goes the worse it will be for the status quo. Remember, the Central Banks were set up by politicians to print money ostensibly to feed their minions, this became the loop for reelection; it continues today. Once the printing stops, the true revolution begins, the free-loaders will no longer be in control, but the men/women of conscince and integrity will once again rule. Work will be rewarded not the other way around.