In the first federal case involving female genital mutilation filed in the United States, two Michigan doctors and the wife of one of the doctors have been charged with performing the banned procedure on two 7-year-old girls.

Dr. Fakhruddin Attar, 53, and his wife, Farida Attar, 50, were arrested Friday at their medical office in Livonia, Michigan, west of Detroit. 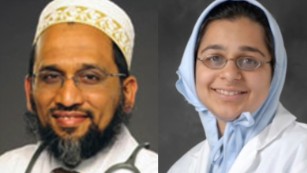 The FBI has a tip line for victims of female genital mutilation, or anyone who might suspect such activity. They can call 800-CALL-FBI (225-5984) or submit a tip via FBI.GOV/FGM.

Excuse us for we are hearing impaired. What has got our attention are the voices of women, most of them professed to be of the liberal progressive bent, who are screaming at the top of their lungs, not for women’s rights but protesting the devastating loss of Hillary Clinton. Suddenly we have gone tone death, we can’t hear them. A trip to the hearing aid specialist determined there was nothing wrong with our ears, everything checked out OK. So what was it that we heard? A DEAFENING SILENCE! Who would ever believe that “silence” is responsible for an ear drum malfunction.

What got us on this topic is none other than female circumcision better known a female genital mutilation.  Last year, the Centers for Disease Control and Prevention estimated that, as of 2012, more than 500,000 women and girls in the United States have already undergone the procedure or are at risk of being subjected to it in the future. The rape of these young girls is an atrocity; their lives ruined forever. Despite prevention efforts, the practice endures.  UNICEF estimated in 2016 that 200 million women living today in 30 countries—27 African countries, Indonesia, Iraqi Kurdistan and Yemen—have undergone the procedures. Most of the victims are Muslim.

The challenge is to bring those responsible for this horrific crime against women to justice. More can be done, laws must be enforced to prevent this from happening. District attorneys who have the power to enforce the law must do so. These archaic practices are not welcome in today’s world. Crimes of this nature leave scars forever. That is why it is so important to bring this to the attention of law enforcement personnel now. Back to our headline, call out the progressive women amid your midst and ask them if they condone this procedure. If they do, it is time to let the world know that they provide cover for this practice to continue. Shame on them.