An alleged drone attack on Maduro Chauvanista of Venezuela missed their man. What a shame! But in the aftermath of the incident (click here) we can see the Tonton Macoutes running like scared dogs.

Apparently they are not paid enough. This is a good sign for the opposition.

President Nicolás Maduro has been elected to a second six-year term in office amid allegations by the international community and Venezuela’s opposition that the polls were neither free nor fair.

His victory comes amid a deep economic crisis which has been driving hundreds of thousands of Venezuelans from the South American country.

Venezuela’s oil revenues account for about 95% of its export earnings. This means that when oil prices were high, a lot of money was flowing into the coffers of the Venezuelan government.

When socialist President Hugo Chávez was in power, from February 1999 until his death in March 2013, he used some of that money to finance generous social programmes to reduce inequality and poverty.

Now, many of the policies introduced by Hugo Chávez also backfired. In order to make basic goods more affordable to the poor, his administration introduced price controls – capping the money people pay for such staples as flour, cooking oil and toiletries. 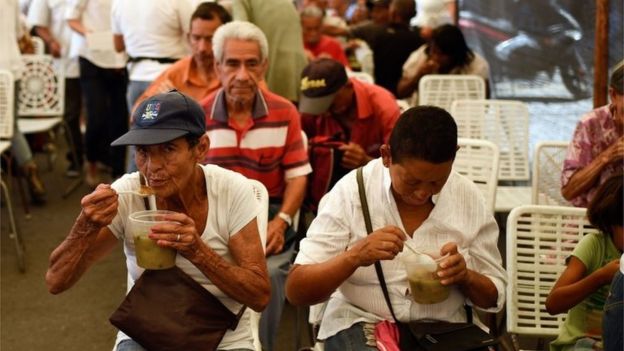 The cult of personality has caused misery to thousands of Chavistas. Pictured here is a typical Chavista looking for a handout.  Even God can’t help the common man.

Another one of Obama’s friends is on the brink.

Maduro is in the middle.