The coup d’etat in Turkey is fresh in our memory. There are those who contest the word coup and they may have information to justify their take on what really happened.  As we said, many Turks believe this was a setup by Erdogan – so he could take control over the levers of government. And in the aftermath of this so-called coup he did just that. Closing down opposition media organizations, rationalizing the military and jailing independent judges.

He blames the United States for providing succor to his arch enemy Fethullah Gulen.  Muhammed Fethullah Gülen ,who lives in Pennsylvania, has denied all charges that he was involved. Erdgoan demands that we extradite him – fat chance of that happening.  Gülen has suggested the coup was in-fact a “self-coup” carried out by Erdoğan to consolidate his grip on power, a belief shared among some analysts and many Turks. Putting all of the facts together it is not hard to see the bellicose nature of the Turks under Erdogan. But it is not wise to disregard his ways because a trouble maker on a quest of

Since the coup attempt Turkey’s Erdogan has gone on a rampage in Syria and against the Kurds living in Turkey. He blames them for the ills Turkey is facing. Also, Erdogan has belligerent words for the Greeks who control part of the island of Cyprus. (see below) But his number one nemesis is Israel. There is no love lost between the two. Lately, Netanyahu and Erdogan have exchanged fighting words.  Israel has Erdogan’s number and is not afraid to play it.

Turkey,  a member of NATO,

big mistake was made in letting him join the exclusive club, has taunted the United States and its allied members by breaking bread with Russia and Iran. The time has come to take him out – Grub Hub is ready to deliver the package. With John Bolton in control it won’t be long before the Muslim’s head starts to roll.

From the West’s perspective, the Turkish government is the equivalent of a close relative with a substance abuse problem: President Recep Tayyip Erdogan has become addicted to authoritarianism. The effects on the family — in this case the NATO alliance, which has included Turkey since 1952 — are devastating. It’s time for President Trump and French President Emmanuel Macron, two leading NATO heads of state, to have a clarifying conversation with Erdogan about his country’s self-destructive impulses.

Trump has shown patience with Turkey’s ongoing military operation against Kurdish militias in northern Syria, which Erdogan considers an existential threat. This should make the Turkish leader more inclined to listen to the U.S. president. However, so far Israel has stayed on the side lines, but in short order will be losing its patience; this means that they most likely will support the Kurdish opposition going forward.

(from Wikipedia)Cyprus was settled by Mycenaean Greeks in two waves in the 2nd millennium BC. Cyprus was placed under British administration based on the Cyprus Convention in 1878 and was formally annexed by Britain in 1914. While Turkish Cypriots made up 18% of the population, the partition of Cyprus and creation of a Turkish state in the north became a policy of Turkish Cypriot leaders and Turkey in the 1950s. Turkish leaders for a period advocated the annexation of Cyprus to Turkey as Cyprus was considered an “extension of Anatolia” by them; while, since the 19th century,[13][14] the majority Greek Cypriot population and its Orthodox church had been pursuing union with Greece, which became a Greek national policy in the 1950s.[15] Following nationalist violence in the 1950s, Cyprus was granted independence in 1960.[16] In 1963, the 11-year intercommunal violence between Greek Cypriots and Turkish Cypriots started, which displaced more than 25,000 Turkish Cypriots[17][18] and brought the end of Turkish Cypriot representation in the republic. On 15 July 1974, a coup d’état was staged by Greek Cypriot nationalists[19][20] and elements of the Greek military junta[21] in an attempt at enosis, the incorporation of Cyprus into Greece. This action precipitated the Turkish invasion of Cyprus on 20 July,[22] which led to the capture of the present-day territory of Northern Cyprus in the following month, after a ceasefire collapsed, and the displacement of over 150,000 Greek Cypriots[23][24] and 50,000 Turkish Cypriots.[25] A separate Turkish Cypriot state in the north was established by unilateral declaration in 1983; the move was widely condemned by the international community, with Turkey alone recognizing the new state. These events and the resulting political situation are matters of a continuing dispute.

What setting an agenda it is wise to bring the other side into negotiations. They may not want to compromise but realpolitik requires it. And Obama will not admit it, but the cause of him losing Congress and “lock her up”

the election can be partly attributed to Obamacare. When the shoe is on the other foot a schism is in the realm of possibility – we are beginning to see the fissures; wider than those on the Big Island.

For instance Obamacare and the Nuclear deal with the Mullahs was a one sided affair. Obamacare was shoved down Americas throat, no negotiations with the Republicans but a quick “take this” and shove it where the sun don’t shine. We all know how Obamacare turned out – being eviscerated by the Trump administration. Its carcass lies waiting for the rest of the vultures to pick it clean. And don’t say we didn’t warn you on the Nuclear bargain. Obama didn’t go to Congress because they were dead set against it. So again the Muslim in Chief once again shoved it down our throats. And to boot he greased their skids with $150 billion. ENTER DONALD TRUMP.

President Trump is withdrawing the U.S. from the controversial Iran nuclear deal and imposing greater sanctions on the Middle Eastern nation, he said from the White House on May 8.

Calling the 2015 landmark accord “decaying and rotten,” Trump said the U.S. would “not be held hostage to nuclear blackmail” and promised to reinstate the highest level of sanctions on Iran. For months, Trump left open whether he would move to officially scrap the agreement or renegotiate it.

The deal, known as the Joint Comprehensive Plan of Action (JCPOA), had lifted most U.S. and international sanctions on Tehran as certain restrictions were placed on Iran’s nuclear program. The historic agreement was reached by Iran and several world powers, including the U.S., in 2015 under Barack Obama’s presidency.

Top Iran official says country will up $$$ on ballistic missile program after US exit from 2015 accord.

The Iranians are good at threats, but they now face several dangers. Their execution of increasing the magnitude of the ballistic missile program faces several challenges – Israel, U.S. Saudi Arabia and others that are waiting in the wings. 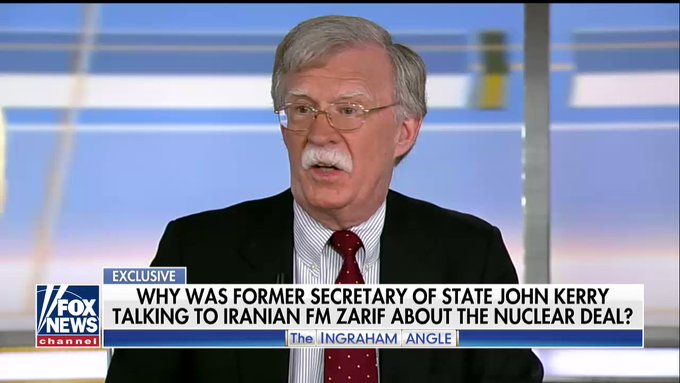 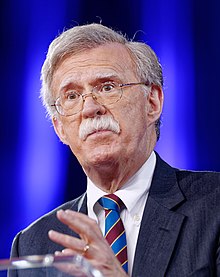 Ambassador John Bolton heads to the White House as National Security Advisor   A game changer, familiar with navigating the swamp and with vast experience in wading through the bureaucratic matrix. When it come to dealing with rouge regimes Mr Bolton is our guy. He now works for a man who shares the same philosophy first hand. Rogue states ruled by so-called leaders for life, such as XI and Rocket Man will now face off with an equal. John Bolton is a neocon; a no nonsense guy when it comes to dictators.

The pundits are aroused, their blood boiling because they see “war” coming into focus. We tell them that war is what is needed. Trade war with China on the horizon, but a down and out brouhaha is a given. Blowing North Korea to smithereens will send them back to the stone age. Then they will understand what happens to blowhards. There will be no more future threats from Rocket Guy. If they even consider transferring any technology or giving assistance to trouble makers in the Middle East it will be our duty to neutralize the individuals. Muammar Ghaddafi can attest to that.

With John Bolton’s appointment as Trump’s new national security adviser, the circle closes on any remaining hope of the 45th President of the United States embarking on a different course from every other president that has preceded him in the Oval Office in recent years, when it comes to foreign policy.

A devoted disciple of the (click) ‘bomb them to hell and ask questions later’ school of US politics, Bolton’s hawkish foreign policy credentials are so extreme he makes John McCain seem like Bambi by comparison.

Obama was briefed on the situation as it happened, what the hell does that mean; quoting Hussein Obama, “horrific massacre of dozens of innocent people” –  “We stand with the people of Orlando, who have endured a terrible attack on their city.” Note that no mention is made of the Muslim killer being an Islamic terrorist.

“To the LGBT community: please know that you have millions of allies across our country. I am one of them.  We will keep fighting for your right to live freely, openly and without fear.  Hate has absolutely no place in America,” Hillary Clinton said in a statement. Have you ever heard of such B.S. Hillary Clinton, for women’s rights allowing these Muslim killers into our country is here number one priority. And she has the gaul spew such faulty diatribe.

Obama will never admit that his Muslim Brotherhood killers are cold blooded murders with deep hatred of the Western world. The Fort Hood killer who massacred 13 of our servicemen still has not been court martialed and to quote Obama on this one, “workplace violence.”  Any Commander in Chief would have had the guy executed on the spot.

And that deserter Bergdahl, yeah the guy who left his command to join the Taliban, was honored by Obama at the White House – Obama entertained his parents and called Bergdahl the younger a hero.  There is a pattern here America; we see it do you?

But we jar your memory here, the killers of Blacks by Whites are always guilty before proven innocent. Cops are always as described as bad, gun crazy vigilantes harboring racist thought and then there are the quotes from loved ones,  “my boy is the sweetest kid in town.”

Newspaper accounts are always biased toward the shooter, we love how they  characterizes these thugs as model citizens. Photos of the victims are shown in the best light, on the other hand the accused pictures are again biased manifesting their dark side as was the case with George Zimmerman who whacked  Trayvon Martin and Darren Wilson who took out Michael Brown – of course they were found not guilty or as is the case with Wilson they failed to indict.

Our hearts at the New Boston Tea Party go out to the victims and their families. May those who will never see the light of day, rest in peace.