Let’s look at the map! On second hand let’s take a look at what happened in Britain. The English (the little people) got fed up with the doings on in Belgium, an unelected elite group known as the E.U. set rules and regulations. The one they mostly  riled against was the “free movement of people across what was once country borders.

The effect of the recent waves of migration, mostly Muslims from the Middle East caused great anguish amongst the English. Whole cities were catapulted into Islamic enclaves. The English were losing their identity and most of all their country to foreigners; most of them were there for economic reasons, a free ride on the socialistic gravy train.

Don’t be misled by those who say otherwise and call the Leaves Xenophobic, these migrants stuck to themselves never integrating into society; they had a foreign culture anathema to Christianity – they prayed to Allah whose anti Christian subversive philosophy challenged the West- they were today’s Trojan Horse.

That brings us to the Red State Map. 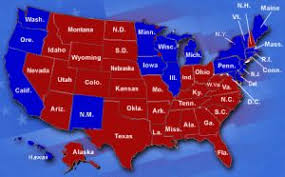 Notice the plethora of red vs blue, a manifestation of the divide in America. What brings us to this schism between states and Washington? To answer that question we look at BREXIT. Britain was dictated to by the E.U., the Red States are dictated to by Obama and the renegade Supremes. We have not seen anything yet, wait to see what Hillary will do. Supreme Court will legislate from the bench.

However, the RED STATES will have none of it. REXIT will happen; a 21st Century Civil war. The 2nd American Revolution in real time. It will be us vs them, taxpayers vs parasites. England has shown the way, the RED STATES will show that it can be done. Say it can’t happen? Think again! The English said, forget the economy, forget the money, “WE WANT OUR COUNTRY BACK.”