Our memory has been jolted once again by a communist commando named Daniel Ortega of Nicaragua; several years ago when he, a Sandanista rebel, came out of the jungle and agree to a peace treaty, eventually winning the presidency of this Central American Country.  Ortega was a commander of the Sandinista uprising that swept to power in 1979, toppling the Somoza family dictatorship that had long ruled with U.S. backing. Ortega, once a mustachioed idol of the international left, led the country from 1979 to 1990, when he lost a reelection bid. Ortega modified his Marxist political stance, reached out to business leaders and Washington, and was again elected president in 2006. He is now serving his third consecutive term. Ortega won in a landslide election in 2016 amid an opposition boycott and allegations of fraud that the government denied. 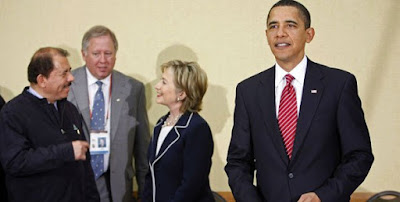 More than three months of political turmoil, demonstrations, looting and street battles have convulsed the Central American nation of Nicaragua.

President Daniel Ortega, the leader of the leftist Sandinista revolution who has long dominated the country’s political scene, has rejected opposition demands that he step down as leader of this country of 6 million.

Critics say Ortega, 72, has become an autocratic leaderwho has lost touch with the people and is intent on imposing a family dynasty in Nicaragua. His wife serves as vice president and other family members hold various key business and media posts. The opposition charges that Ortega has throttled dissenting voices, overseen mass repression in recent months, consolidated power in the legislative and judicial branches, and pushed for an end to presidential term limits that allowed him to run successfully for a third five-year term in 2016. Detractors say the one-time leftist icon has become a septuagenarian mirror-image of former dictator Anastasio Somoza, overthrown by Ortega and other Sandinista revolutionaries in 1979.

The U.S. administration of President Reagan viewed the emergence of the left-wing Sandinista government in Managua as a threat to Washington’s regional interests during the Cold War. U.S.-backed forces known as Contras fought the Sandinista government during much of the 1980s, resulting in more than 30,000 deaths. Reagan lauded the Contras as “freedom fighters,” despite allegations linking the CIA-backed forces to human rights abuses and drug trafficking.

PORT-OF-SPAIN, Trinidad and Tobago — President Obama endured a 50-minute diatribe from socialist Nicaraguan President Daniel Ortega that lashed out at a century of what he called terroristic U.S. aggression in Central America and included a rambling denunciation of the U.S.-imposed isolation of Cuba’s Communist government.

Obama sat mostly unmoved during the speech but at times jotted notes. The speech was part of the opening ceremonies at the fifth Summit of the Americas here.

Later, at a photo opportunity with Canadian Prime Minister Stephen Harper, Obama held his tongue when asked what he thought about Ortega’s speech.

Secretary of State Hillary Clinton ignored two questions about Ortega’s speech, instead offering lengthy praise of a cultural performance of dance and song opening the summit.

“I thought the cultural performance was fascinating,” Clinton said. Asked again about the Ortega speech, Clinton said: “To have those first class Caribbean entertainers on all on one stage and to see how much was done in such a small amount of space, I was overwhelmed.”

A senior administration official declined to criticize Ortega, saying the president wanted to focus on the future.

DIRIAMBA, Nicaragua –  A pro-government mob shoved, punched and scratched at Cardinal Leopoldo Brenes and other Catholic leaders as they tried to enter the Basilica San Sebastian. “Murderers!” people shouted. An auxiliary bishop was slashed on the arm with some sort of sharp object.

“There are sharpshooters located in different parts of the city. We ask the citizens to take shelter in their homes.” “We are being attacked by the National Police and paramilitaries armed with AK-47s and machine guns in our indigenous neighborhood of Monimbo,” said Alvaro Gomez, a resident. “We are resisting with homemade bombs and stones.”

Monimbo has been a center of resistance against the government of President Daniel Ortega since a wave of protests began April 18 over a since-aborted pension reform plan.  Since then, violence has claimed over 270 lives, most of them civilians, according to CENIDH.

Clinton’s track record in Latin America includes support for the 2009 coup in Honduras, intervention in Haiti, and free trade and militarization policies.

Latin America received scarce attention through the Democratic nomination race. But Hillary Clinton’s foreign policy track record — widely heralded as vital to securing her spot as the patry’s candidate given her experience — in the region is a telling sign of not only the disconnect between her promises and her policies in practice, but also of her hawkish approach to the countries south of the U.S. border.

As historian Greg Grandin argued about Clinton’s foreign policy for Latin America in an article in The Nation, the impacts of her policies of ramping up free trade, border militarization, and the war on drugs have played a part in worsening insecurity and human rights conditions in several countries. “Beyond any one country or policy, these policies fed off of each other,” Grandin wrote, noting links between privatization, displacement, and violence.

As Clinton is set to make her presumptive nomination official at the Democratic Convention in Philadelphia from July 25 to 28, teleSUR recaps how her foreign policy as Secretary of State had an impact on Latin America.

Hillary Clinton’s diplomatic role as then-Secretary of State in helping to secure the 2009 coup in Honduras has become well-known after the release of email transcripts and her 2014 book Hard Choices solidified the evidence.

In her autobiography “Hard Choices,” Clinton admits that she used her power to bring pro-U.S. “stability” to Central America, even if it meant doing away with democracy.

“We strategized on a plan to restore order in Honduras and ensure that free and fair elections could be held quickly and legitimately, which would render the question of Zelaya moot,” Clinton wrote. Those “free and fair” elections involved a media blackout, targeted assassinations of anti-coup leaders, and a generalized and grave deterioration of human rights ahead of the polls. No international institutions monitored the elections.

Clinton’s actions toward the Central American country and the United States’ ongoing support of corrupt Honduran security forces — accused of operating death squads — shot into the spotlight again with the recent murder of well-known Honduran Indigenous leader Berta Caceres. The assassination, along with dozens of similar killings in recent years, epitomizes Honduras’ deadly criminalization of political dissenters fighting against the neoliberal policies and intense militarization rolled out in the wake of the coup.

Clinton has painted herself as a champion of women’s right, but feminists in Honduras have a starkly different view of how her policies affect women. In an interview in Buenos Aires over a year before her murder, Berta Caceres specifically singled out Clinton for her hand in the coup, arguing that it highlighted the extent of North American “meddling” in Honduras and support for the ongoing crisis.

What’s more, Clinton’s stance on Honduras hasn’t changed. Although her role in Honduras did not come up in Democratic debates with rival Bernie Sanders, in an interview with the editorial board of the New York Daily News, she defended her support for the coup and advocated a new “Plan Colombia for Central America.” Plan Colombia, a counternarcotics and counterinsurgency military aid package launched in 2000 by then-President Bill Clinton, is widely considered by human rights advocates to have been a disaster that spurred massacres, death squads, and exacerbated the civil war.

Seven years ago, in the middle of the night, soldiers burst into the bedroom of Honduran President Manuel Zelaya. Still in his pajamas, the president was forced at gunpoint onto a waiting jet and flown to exile.

Then-Secretary of State Hillary Clinton was among many officials around the world who condemned the ouster of the democratically elected leader as a coup. She called for “the full restoration of democratic order in Honduras.”

FLIP FLOP: Last month, the Democratic presidential front-runner appeared to hedge her position. She suggested that the Honduran soldiers had acted legally in their late-night raid because they were carrying out orders from the country’s supreme court.

“The national legislature in Honduras and the national judiciary actually followed the law in removing President Zelaya,” Clinton said in response to a question in an interview with the New York Daily News editorial board before the New York primary.

“Now, I didn’t like the way it looked or the way they did it, but they had a very strong argument that they had followed the constitution and the legal precedence,” she added.