The Republican lap dogs are once again putting the dagger into the American people. Mind you that the People’s House is controlled by the Elephant party.

The appointment of the next Supreme Court Justice must wait until after a new President is sworn into office.  Time for the American people to decide.  We warn McConnell in no uncertain terms that No hearings, No vote is to take place. Look at the decisions during the past four years, the liberals never broke rank. Questions arise why; and the answer is that their agenda is to not follow the Constitution. Breyer, speaking at Yale last week, said “I’ve seen change, The change, I think one of the changes and perhaps the most remarkable change, is the change in the number of cases that require a judge to know something beyond our shores in order to make a sensible decision on the case.”  Pardon us, making a decision on the laws, behaviors and attitudes of foreigners. How did he ever pass the nomination process? Give us a break.

The Democrats are clamoring for a vote, hollering, screaming, spitting, doing anything they can to denigrate the Republicans. These blowhards think that by doing this the Republicans will suffer a backlash in November. The Democrats will call the Republicans obstructionists. Let us set the record straight. Obama and his cadre of criminals are on record, including Biden and Chuck Schumer, to filibuster previous Supreme Court nominees.

President Obama, who is demanding that Republicans vote on his nominee to replace the late Supreme Court Justice Antonin Scalia, “regrets” his 2006 filibuster of a conservative nominee to the court, his spokesman said Wednesday.

To set the record straight read below to see the outing of the Democrat liars.

The media have taken to acting as if this move is unprecedented, and that a senator has never publicly stated he would intentionally block a presidential nomination. Not true. Not only have there been several lengthy Supreme Court vacancies, but there are plenty of past instances when senators refused to confirm a president’s nominations.

1. Sen Chuck Schumer (D-N.Y.) said in 2007 that President George W. Bush shouldn’t get to pick any more Supreme Court justices because Schumer was afraid the bench leaned too far Right. Schumer made this remark a whole 19 months before the next president was inaugurated.

“We should not confirm any Bush nominee to the Supreme Court, except in extraordinary circumstances,” Schumer said in a speech to the liberal American Constitution Society. “They must prove by actions, not words, that they are in the mainstream rather than we have to prove that they are not.”

2. His remarks in 2007 weren’t the only time Schumer vowed to stop a Republican nominee. In 2004, he said he would do everything in his power to stop Bush from elevating Charles Pickering to a federal appeals court in 2004.

“I’m prepared to do everything I can to stop the nomination of Justice Pickering,” Schumer said. “We can do a lot better.”

3. Schumer again promised to make the nomination process difficult for President Bush amid a confirmation battle over Carolyn Kuhl, who was nominated as a judge to the Ninth Circuit Court.

In 2004, his office released a statement saying Senate Democrats planned to “hold nominations until the White House commits to stop abusing the advise and consent process.”

The statement was part of Democratic coalition to stop Bush from using his recess appointing powers. The president eventually conceded and promised he would stop appointing judges while Congress was on vacation in exchange for them stopping filibustering.

4. Then-Senator Barack Obama said in 2006 that he supported the Democratic-led filibuster to stop Justice Samuel Alito from making it to the Supreme Court.

There are some who believe that the president, having won the election, should have complete authority to appoint his nominee…that once you get beyond intellect and personal character, there should be no further question as to whether the judge should be confirmed. I disagree with this view.

“The record demonstrates that we cannot count on Judge Alito to blow the whistle when the president is out of bounds,” Kennedy said.

5. In 1960, the Democratic-controlled Senate passed a resolution to block President Eisenhower from being able to make any more recess appointments to the Supreme Court. The resolution stated:

Expressing the sense of the Senate that the president should not make recess appointments to the Supreme Court, except to prevent or end a breakdown in the administration of the Court’s business.

6. Kennedy led a gang of eight senators in 2003 to block Bush nominee Miguel Estrada from rising to the Court of Appeals.

“Instead of looking for candidates who are extreme ideologues, the president should work with the Senate in nominating individuals who have the highest qualifications,” Kennedy said, while taking a victory lap after the Bush administration withdrew Estrada’s nomination.

7. The AFL-CIO union vowed to block then-President Ronald Reagan’s nominee Robert Bork by soiling his public reputation so badly that any Democratic senator who voted in favor of confirming him would have to explain it to his constituents. Kennedy continued this line of rhetoric in a well-known floor speech. He infamously said:

Robert Bork’s America is a land in which women would be forced into back-alley abortions, blacks would sit at segregated lunch counters, rogue police could break down citizens’ doors in midnight raids, schoolchildren could not be taught about evolution, writers and artists could be censored at the whim of the Government.

8. Joe Biden wrote the playbook for how to “bork” a Supreme Court nominee, a descriptive verb that now means to publicly pillory a nominee’s reputation to make it politically difficult for senators to vote for them. It’s named, of course, after what Democrats did to Robert Bork.

9. Democratic groups vowed to “bork” Justice Clarence Thomas, George H.W. Bush’s nominee to the Supreme Court. They failed, but the personal attacks on Thomas were brutal.

“We’re going to bork him,” said National Organization for Women’s Flo Kennedy. “We need to kill him politically.”

10. In 2008, Democrats banded together to filibuster Bush’s decision to nominate Priscilla Owen to a federal circuit court.

Eleanor Smeal, president of the Feminist Majority Foundation, urged Senate Democrats to “stand up and fight as they have been doing with Miguel Estrada.”

“At this time of global turmoil, we don’t need extremists in the courts willing to make a Dred Scott decision in the area of women’s fundamental rights,” she said.

Two venerable foes enter the Octagon, the Senate and the Anointed One,  the crowd cheering from the peanut gallery, not a person sitting in their seat; clamoring, cheering,  shouting, fists in the air for their man. In the Red Corner is Mitch McConnell, in the Blue Corner is Barack Hussein Obama. The Judges are the audience, the American people; this will be a blood match, Winner take all.

Does McConnell have any swagger in his clinging/clanging bones or will he lie down waiting for the Barack steamroller to flatten him like a wabbit? Soon the outcome will be known.

Think what Obama accomplished with Executive Orders, then think of what he could do with the Supreme Court in his pocket. 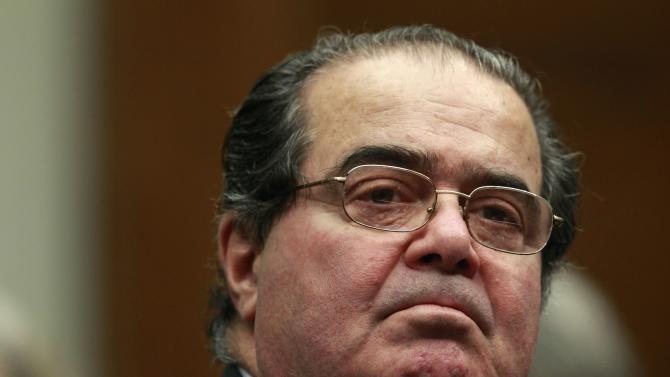 Supreme Court Justice Antonin Scalia, the judicial standard-bearer of the conservative movement and the court’s most provocative member, died Saturday. He was 79.

‎His death means President Obama could have an unprecedented chance to try to shift the balance of the court during his final year in office — setting up a Senate battle in the heat of an election year.

Obama said he planned “to fulfill my constitutional responsibility to nominate a successor in due time.”

The U.S. Marshals Service in Washington confirmed Scalia’s death at a private residence in the Big Bend area of south Texas.

The more defining question is “what will happen next.” We now will see what the Senate does. Do they have a backbone or are they a an Obama Rubber Stamp. This fight is going down to the finish. There is no way in hell that the Republicans should take up a vote to fill Scalia’s spot on the court. We are talking war here. Just check the Venezuelan situation by clicking here. Then America will understand the consequences of a Senate vote.