A new day for the Kurdish Independent movement starts tomorrow. Voting for independence is a long time coming. The Kurds, numbering 30 million have been subjugated to the likes or dislikes of their home countries over the past centuries; Syria, Iraq, Iran, Turkey are now coming face to face with the grave divisional error of the Sykes-Picot agreement ending WWI. 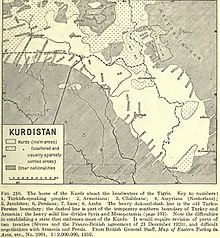 An ethnographic map of Eastern Turkey after WW1

As originally cast, Sykes-Picot allocated part of Northern Kurdistan and a substantial part of the Mosul vilayet including the city of Mosul to France in area B, Russia obtained Bitlis and Van in Northern Kurdistan (the contemplated Arab State included Kurds in its Eastern limit split between A and B areas). Bowman says there were around 2.5 million Kurds in Turkey, mainly in the mountain region called Kurdistan. The Kurdish Peoples doesnt have any own State since the fall of the Zand dynasty

Partitioning of Ottoman Turkey according to the aborted Treaty of Sèvres

Sharif Pasha presented a “Memorandum on the Claims of the Kurd People” to the Paris peace Conference in 1919 and the suppressed report of the King-Crane Commission also recommended a form of autonomy in“the natural geographical area which lies between the proposed Armenia on the north and Mesopotamia on the south, with the divide between the Euphrates and the Tigris as the western boundary, and the Persian frontier as the eastern boundary.”

The subsequent Treaty of Sevres potentially provided for a Kurdish territory subject to a referendum and League of Nations sanction within a year of the treaty. However the Turkish War of Independence led to the treaty being superseded by the Treaty of Lausanne in which there was no provision for a Kurdish State.

The end result was that the Kurds were included in the territories of Turkey, Iraq, Syria and Iran. MOMENTUM FOR REFERENDUM GROWING ON EVE OF KURDISTAN INDEPENDENCE VOTE

Tens of thousands packed a rally in Erbil’s stadium on Friday, waving a sea of Kurdish flags. Among them were also Israeli flags, a display of affection for the one country that has openly supported the referendum. A Kurdish man holds an Israeli and Kurdish flag during a rally to show their support for the upcoming September 25th independence referendum in Erbil, Iraq September 16, 2017. (REUTERS/AZAD LASHKARIG)

Some Kurds say this moment is their 1948 – a reference to Israel’s declaration of independence. They see the challenges Israel faced in its early years as similar to the problems their region now faces.

Iran, Turkey, the Iraqi government in Baghdad, the US, UK, the UN and many other countries have pressured the Kurdish leadership to cancel or postpone the vote. Even up to the eleventh hour the pressure continues, with the UN Security Council expressing concern about the vote and US presidential envoy for the coalition to counter the Islamic State Brett McGurk encouraging Barzani to reconsider.

“There is no Iraq, it is a militia state,” says Hussein Yazdanpanah, a leader of the Kurdistan Freedom Party (PAK), who serves a front line commander northwest of Kirkuk.

Yazdanpanah’s Peshmerga soldiers are Iranian Kurds who oppose the regime at home and have come to the Kurdish region of Iraq to fight alongside their comrades against the common threat of the Islamic State. His men have been holding a front line for three years on a line of dusty hills that overlooks Hawija, where the Iraqi army launched an offensive on September 20.

“Iran, Iraq and Turkey do propaganda against the referendum,” he says, sitting in a chair that overlooks the flat plains around Kirkuk. “Kurdistan has enemies, but also friends. The most important thing you see here is that we have all the minorities and ethnicities [and they] want a referendum. Kurds decided not to stay with this country [Iraq] which has discrimination and inequality.”