Venezuela is in the throes of an economic meltdown; peasants cooking their leather shoes, making broth laced with field grass,  The Red Blooded socialist citizens are calling for Maduro’s head, Venezuela leader gets emergency powers, Chavez’s hand picked successor has continued the revolution, chasing out the capitalists, entrepreneurs, doctors and those who work for a living; with them gone the economy has gone into a tailspin, tanking deeper than Chavez’s grave. 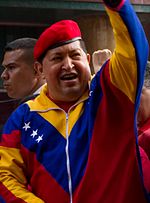 Chávez meets with Hillary Clinton at the Summit of the Americas on 19 April 2009.

Venezuela has stolen the means of production, nationalizing industry after industry. Forget no inflation or slight deflation Venezuela takes the cake, 700% forecast in 2016. Murder by drug gangs, political opponents assassinated, robberies gone bad, knife attacks, what ever,  the Chavista nation comes in second with 90 murders per 100,000; compare that to the U.S. with four per 100,000.

The past Chavez/Maduro voter have now reaped what they sowed, Socialism, the worst poison known to man. But please my fellow revolutionaries, don’t be alarmed at what is going down in Marti square, this is a dress rehearsal of what could happen here if the likes of Clinton seize the White House. A continuation of dollar printing will eventually break our bank too, it always does.

Although blood has not flowed in Venezuela as of yet, it soon will.. The army and national guard will no doubt bring it on. After all, smash and grab (actually there is nothing to grab) so it will be smash and burn as control for for levers of power will ultimately result in guerilla warfare once again. We hope most of us will stand by and let the Venezuelans delight themselves in the game of anarchy. Do you want hard currency? Put it on the internet, pay per view, this will bring in some hard currency; wouldn’t you say.

Dire straits mean dire action, we suggest they call Joe Kennedy for help, you can always count on him to return the favor. Interesting arrangement between Joe and Hugo is, well shall we say, very enlightening.

From 2009. Over the past four years, Citizens Energy Corp., the signature nonprofit founded by Kennedy in 1979 as a political launching pad, has grown from a local charity serving 10,000 Massachusetts homes a year into a national effort delivering free fuel to 200,000 households in 23 states.

And Kennedy, a former U.S. representative, has relied almost exclusively on Chávez, a vociferous critic of the U.S. government, for that growth.

Since 2005, Citizens’ 877-JOE-4-OIL campaign has been sustained by the oil fields of Venezuela. Chávez, who controls the industry there, has delivered crude oil at no charge to a Citizens affiliate, which has resold it and used the money to pay for oil deliveries to America’s poor. In the past two years, Citizens has been given 83 million gallons of crude by Chávez and sold it for $164 million – money used to fund almost its entire philanthropic mission.