George, “yeah, Mr. President, you got that right.

You may think by the title of this blog that we are devasted by the evil destruction in Turkey levied by Mother Nature, most likely resulting in over 10,000 killed,  Yes we are!

But the true devastation we feel is from the Global Warmer Mongers who have yet to speak up. We are patiently waiting for them to blame the catastrophe of the Anatolian and Eurasian Plates toggling together on Global Warming.

You can bet that at the moment they are tongue tied, but soon these “Fox in the Theater types“ will scream at the top of their lungs that it was due to man made CO2 from burning fossil fuels. Tell that to the people in Turkey.

Out hearts go out to all the families that lost loved ones.

“Where Revolution is the Solution”

Thailand princess has been in a coma for about 3 weeks after getting a booster.. the Royal family has discovered Pfizer has lied & it’s looking like they will tear up their contract & demand billions back. This could be the start of Pfizer’s demise..

Just days after receiving her covid booster jab, the daughter of the king of Thailand collapsed and fell into a coma.

Princess Bajrakitiyabha, who is the potential heir to the Thai throne, is in a grave condition weeks after she collapsed. 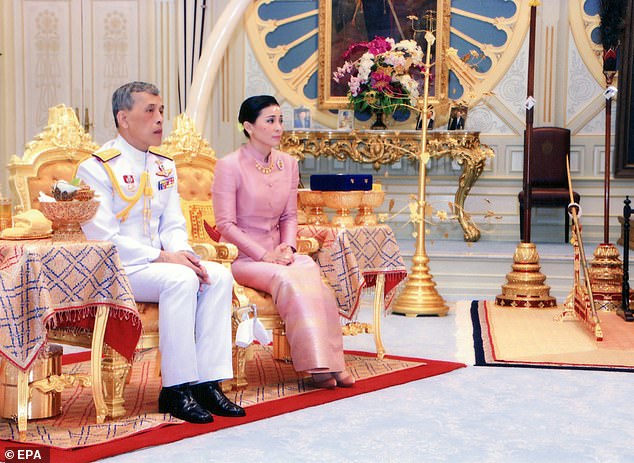 Some reports suggest she had suffered a heart attack though her family were told she likely suffered a bacterial infection. None the less, six weeks later and the princess is still in a coma and being kept alive by machines.

The Royal Family have now been alerted to the fact that the princess has most likely been a victim of the jab.

Top Thai authorities including advisors to the King have been in discussions with Prof. Sucharit Bhakdi and are preparing to have the Pfizer contracts declared null and void according to reports.

If this happens Thailand will become the first country to make the contract null and void, meaning that Pfizer will become responsible for all vaccine injuries. BRANDEN MUST COME CLEAN, HE HAS BEEN BEATEN LIKE A DRUM AND IS NO LONGER FIT FOR THE JOB. 25th Amendment Boys. Biden spreading fabricated lies. America knows that this invalid is on his last legs, doubt he will make it through 2023. That is our prediction. Watch him walk, he is weak, he can’t stand up. America has a mumbling stumbling invalid as president. What a disgusting figure.

Trump said the Biden administration is spreading these lies because “they look so bad, as usual.” “They are incompetent,” he said.

Former Trump White House national security adviser John Bolton told Fox News Digital that he never heard of anything like this under his tenure.

“I don’t know of any balloon flights by any power over the United States during my tenure, and I’d never heard of any of that occurring before I joined in 2018,” Bolton said. “I haven’t heard of anything that occurred after I left either.”

Bolton said that if the Biden administration has “specific examples, they need to tell Congress.”

Brandon Scott, just 38 years of age, is the mayor of Baltimore. Jim Strickland Jr., an attorney and politician, is the 64th and current mayor of Memphis, where the Memphis police department has just announced plans to permanently deactivate the unit that five of the officers involved in the vicious beating of Tyre Nichols belonged to. Mike Duggan, meanwhile, is currently serving as the mayor of Detroit.

Two more U.S. cities run by Democrats appear among the 30 most dangerous in the world: Albuquerque (#23), where 45-year-old Tim Keller serves as the 30th mayor, and St. Louis (#27), where Tishaura Oneda Jones has served as mayor since April of 2021.

Tracking back for a wider view yields a still grimmer perspective for Democrats, as another six Democrat-run cities rank among the world’s 50 most dangerous: New Orleans (#35), Oakland (#38), Milwaukee (#40), Chicago (#43), Philadelphia (#46), and Houston (#50). Again, all of these cities are run by Democrats.

Baltimore has a Crime Index score of 75.5 and a Safety Index score of 24.5. “Charm City” finds itself sandwiched between Port of Spain, the capital of Trinidad and Tobago, and Rosario, Argentina’s third-most populous city.

In 2019, then-U.S. Attorney General William Barr referred to Baltimore as the country’s “robbery capital.” Although the comment was deemed controversial by some commentators, it is amply substantiated by crime statistics. Last year, the city of 576,000 experienced a sharp spike in robberies, with robberies of convenience stores jumping by 300%. Baltimore also suffered a sharp increase in homicides.

In Detroit, more than 220 officers left the police department last year. Long known as the automobile capital of the world, Detroit has, in recent times, become more closely associated with assaults, shootings and homicides. On New Year’s Day, for instance, a total of 6 people were shot, one of them fatally. Five days later, a 16-year-old was killed and an 11-year-old was injured in yet another shooting.

Democrats have often been labeled “soft on crime” by their opponents. The latest Numbeo report will do little to stem such denunciations.

​Although a minority are content living in a Stalinist dystopia, most aware Americans seem to have lost their sense of outrage as they have quietly accepted the gradual dismantling of our constitutional republic, the impoverishment of our Middle Class and the degradation of our history and culture by a corrupt and perverted political aristocracy, who have now abandoned even the illusion of democracy to implement a globalist one-party authoritarian state.

A virus created in a Chinese laboratory caused a three-year pandemic under which unnecessary, destructive and draconian policies were implemented that eroded civil liberties, damaged public health, undermined trust in science, sabotaged election integrity and destroyed the economy.​

​Yet, not only has no one been held accountable, many of those complicit in the demolition of the country have been rewarded.

We learned this past week that Pfizer, the pharmaceutical company responsible for an arguably unsafe and ineffective COVID-19 vaccine, in order to sustain profits, has been engaging in viral “gain of function” research, the very activity that caused the pandemic, thus potentially exposing the world to even more dangerous pathogens.

Yet, there is no outrage.

The current situation in the country was predictable, if not inevitable.

On October 26, 2016, prior to Donald Trump’s unexpected victory in the presidential election, I wrote an article in The Hill entitled “There is no place for me in Hillary’s America.”

What I described in that 2016 article, some of which is quoted below, was simply delayed by Trump’s Presidency.

I consider myself a patriot, someone who believes in the Constitution, the rule of law and representative government.

Under a President Hillary Clinton, none of those will any longer exist.

Electing Hillary will mean, quite literally, the end of the United States as it was originally designed.

The Constitution will be de facto obsolete; the rule of law will be arbitrarily applied dependent upon one’s financial status or political clout; and we will have a government driven by crony capitalism and political expediency, benefitting only the rich and powerful, and one conspicuous for corruption, fraudulent elections and pseudo-representation.

Under Hillary’s open borders policy, the United States of America will be neither United nor America. It will not be a melting pot, a nation guided by the notion of E Pluribus Unum, but a collection of simultaneous arguments, where the only thing we have in common is our differences.

It will mean a president, who is, without any doubt, hopelessly corrupt and a pathological liar.

It will mean that the organs of government will not be used to enforce the law, but to enforce the political whims of Hillary Clinton, courtesy of the Department of Justice, the Federal Bureau of Investigation and the Internal Revenue Service.

Because, when blatant and outrageous lies are no longer sufficient to soothe the electorate into complacency, such a government must begin to curtail freedom and oppress the people in order to pursue its policies and remain in power.

For me, one who traveled in the Soviet Union and Eastern Europe during the Cold War, Hillary’s approach to government has a familiar ring.

​n “Mountain of Crumbs”, a memoir of childhood in the 1960s and 1970s propaganda-soaked Soviet Union, Elena Gorokhova explains the meaning of “vranyo”, the Russian word for “a white lie or half-truth:”

“In practice vranyo provided a coping mechanism for both unbearable tragedies and petty annoyances. Can’t feed your starving children? Tear up a piece of bread to make a mountain of crumbs and declare it an abundance of food.”​​

​There is no outrage because, like the Soviet Union, Americans have been conditioned to accept unaccountability, in which lying and incompetence are expected behavior of the leadership class.​

​Without justifiable rage, we are all simply slouching towards tyranny.

Lawrence Sellin, Ph.D. is retired U.S. Army Reserve colonel and a veteran of Afghanistan and Iraq. He had a civilian career in international business and medical research. Dr. Sellin is the author of Restoring the Republic: Arguments for a Second American Revolution. His email address is lawrence.sellin@gmail.com.

—
You received this message because you are subscribed to the Google Groups “Lawrence Sellin” group.
To unsubscribe from this group and stop receiving emails from it, send an email to lawrence-sellin+unsubscribe@googlegroups.com.
To view this discussion on the web visit https://groups.google.com/d/msgid/lawrence-sellin/6a6e09be-aa60-45cd-9a09-51fd4462e996n%40googlegroups.com

“WERE REVOLUTION IS THE SOLUTION“