A game of chance. “Do you feel lucky punk?” Vlad the Impaler has five bullets in the chamber that hold six;  it is his turn to pull the trigger. The odds are not in his favor. In fact the likely hood of blowing out his brains is statistically 95%.

Sometimes,  your luck and bravado becomes your worst enemy. Now it is Vlad’s time to experience splattering of grey matter. You can be a bully some of the time, but once in awhile there is that one guy out there who says, “enough is enough.” Voldodymyr Zelensky is that Man. 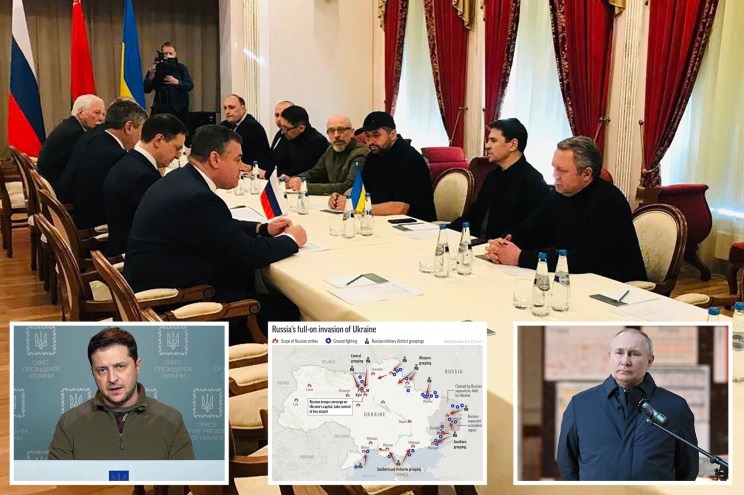 High-stakes talks between Russia and Ukraine began Monday, shortly after the Ukrainian president’s office said the invaded country’s goal for the discussions was an immediate cease-fire and the withdrawal of Russian forces.

How to help the people of Ukraine: 3 ideas for giving 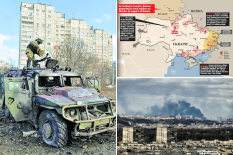 Democratic Socialists blame US imperialism for Russian invasion of Ukraine Understanding the mind of a maniac is all but impossible. They don’t think in logical terms. Suffering defeat at the hands of a pushover can bring unexpected reactions; like a fighter trying to get in that last blow seconds before seeing stars.

But in war things are different; just ask the Japanese. Putin finds himself at the proverbial “Y” in the road. Will he continue on the same path, which apparently, the folks back home can’t stomach, or is he going the Psycho route?

Think about this for a moment! Getting his assed whip in a street fight, the guy takes out a Shiv, brass knuckles in tow. That is where Putin finds himself at the “Y” in the road. Only he knows what is next. However, threats of going Nuclear do not sit well with the nations of the world. This is a sign of desparation. They see this as a brazen attempt to curate a win, when in fact the aggressor is being pummeled to death.  Putin sees himself as Napoleon, Caesar Augustus, Peter the Great, Alexander of Macedonia, Constantine,  Julius Caesar, William the Conqueror, Charlemagne, Ashoka and Genghis Khan all rolled into one.

However, Voldodymyr Zelenskyy is playing the role of Alfred the Great. Alfred’s claim to fame was that his kingdom was able to win wars that were hopeless.

The invasion continues to rage in the streets and air. Several Russian jets have been shot down. Tanks stopped in their tracks and prisoners taken This is not the picture Vlad the Invader envisioned. 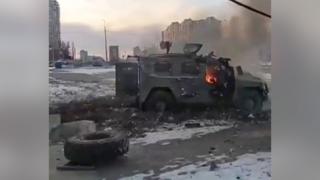 GERMANY WENT SWIFT. Russia to feel their financial yaysta (balls яйца) squeezed. But that is not the most pressing issue. The Ukrainians are fighting for their life, the Russians not so; that is the difference.

Didn’t this IDIOT ever hear of supplying Ukraine with the most sophisticated of weapons. What should the Ukrainian Military do next. Bring the fight to Russia. RPG’s, tanks, missile to target Russian cities. Make them pay the price in Blood. This will cause mass protests, possibly a Revolt against Putin. Now is the time for Russians to spill Blood. Make ordinary citizens of Russia realize that there is a price to pay for this INVASION. If not now, WHEN?

Something wrong with Biden. America and the world knows that this imbecile has NO CLUE on what to do. You would think that he would have learned his less in Afghanistan. President Biden, in a new interview published Saturday, warned that there is “no sanction that is immediate,” just as the U.S. and allies are using sanctions as their main tool to target Russia over its invasion of Ukraine.

“You have two options. Start a Third World War, go to war with Russia physically. Or two, make sure that a country that acts so contrary to international law ends up paying a price for having done it,” he claimed in an interview with Brian Tyler Cohen when discussing the options for dealing with the invasion by Moscow.

BIDEN SAYS ‘NO-ONE EXPECTED SANCTIONS TO PREVENT ANYTHING FROM HAPPENING,’ DESPITE PRIOR WHITE HOUSE CLAIMS

Russian President Vladimir Putin is “furious” that his invasion of Ukraine hasn’t been “easy” after Russian troops haven’t taken any major city yet, according to a member of the European Union Parliament. 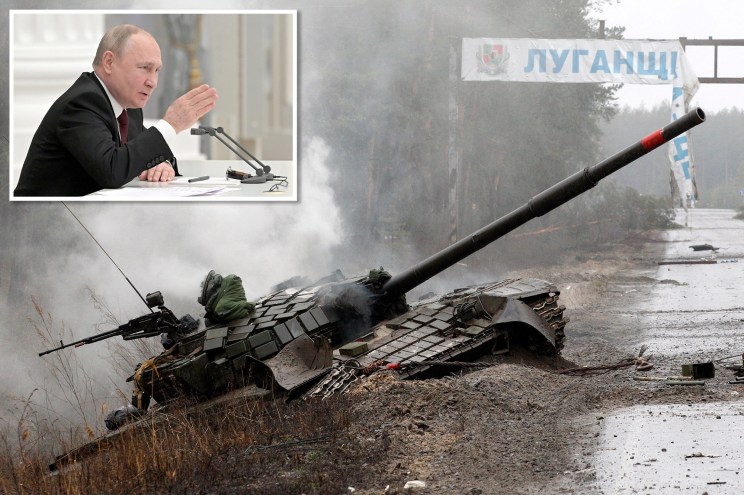 European leaders have moved closer to cutting Russia off from the SWIFT banking system as Germany remains the sole holdout over implementing the extreme measure following the invasion of Ukraine.

Foreign ministers of the Baltic States and Poland wanted to cut Russia from SWIFT as part of the initial wave of sanctions, but Germany, Italy, Hungary and Cyprus resisted the move. Biden SPELLS DISASTER.  An incompetent resides in the White HOuse. A skeleton of a man who does not have what it takes to be the Leader of the Free World. A global Buffoon. Afghanistan lost, Iran playing us like a sucker, China ready to move on Taiwan, and Russia, what can’t we say about Russia that hasn’t already be said. The Bear has made Biden look like the CIRCUS FOOL; a clown sits in the White House. 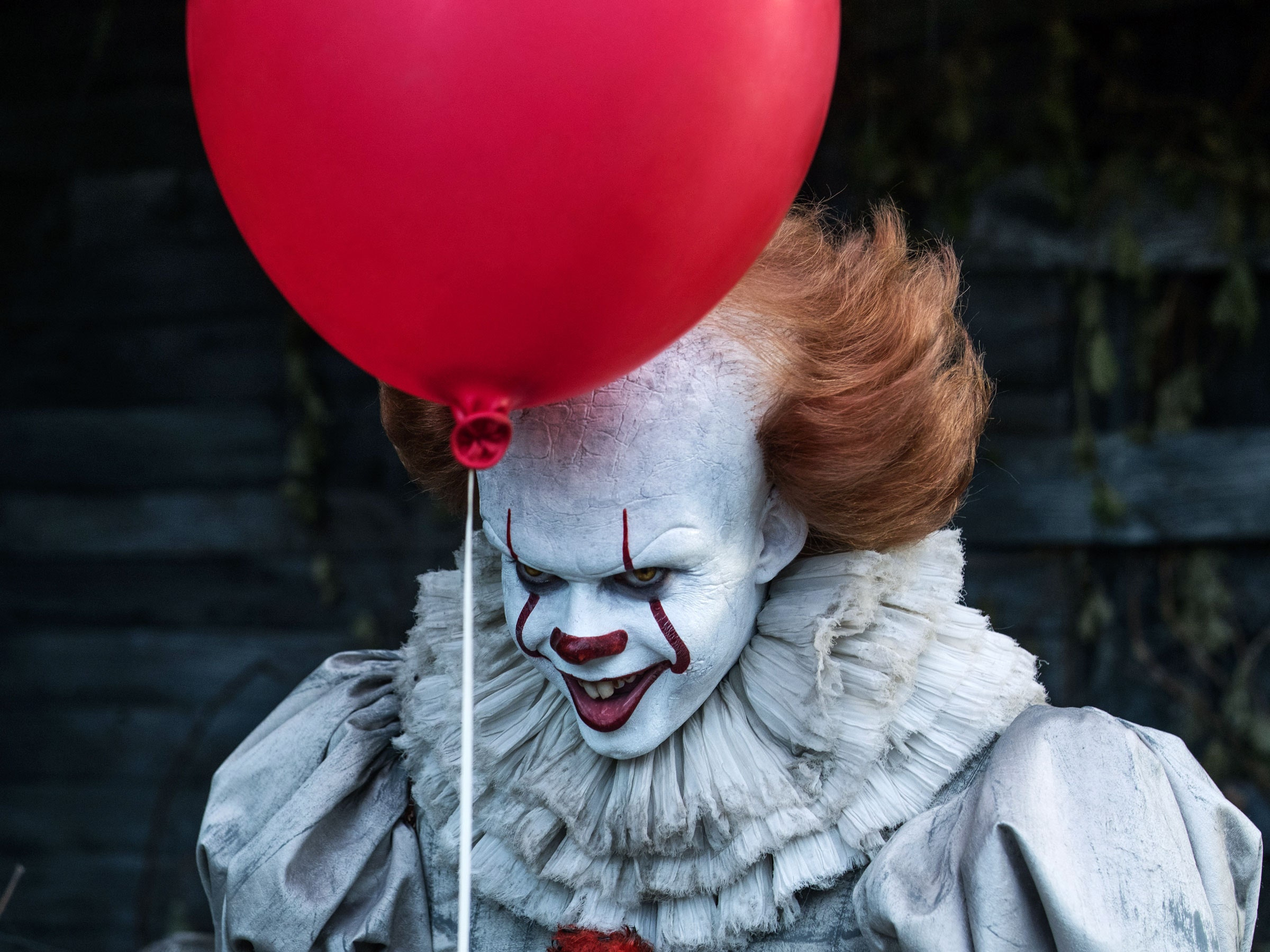 He is literally a laughing stock in face of the world, to say the least. A failure in all aspects; he has divided the country ala Obama, not protecting our borders against criminals. What has Biden actually done? A Big Fat Nothing. Joe Biden is the ultimate catastrophe; the worst president ever. If this were Trump, Impeachment would be in-order. Yebat’ tebya Joe Biden

As Russia rolls over Ukraine with the only Western response being increased sanctions, the question arises: Is this the beginning of a new world order, where nations may invade with impunity?

More specifically: Will Washington and its allies react any differently if the next aggressor is China, and the next target Taiwan?

Under today’s policy of “strategic ambiguity,” the White House or congressional leaders could consider arms sales and training sufficient to satisfy the Taiwan Relations Act’s obligations and question whether the United States should defend Taiwan against a Chinese invasion.

Moreover, if China pursued less-escalatory options like blockading Taiwan’s ports or occupying its outlying islands, it is unclear if the US military would be directed to intervene.

Taiwan has some additional strikes against it. Ukraine is widely recognized as an independent nation enjoying diplomatic relations with more than 100 countries yet still faces Russian aggression alone. In contrast, the government in Taipei is only formally recognized by 15 nations, with most countries — including the United States — accepting China’s characterization of Taiwan as a breakaway republic. If Ukraine is any example, few countries may feel compelled to defend Taiwan if Beijing attacks.

The bright side for Taiwan

But there are some reasons for hope. Taiwan is separated from mainland China by about 90 miles of water, making an invasion challenging and more obvious than Russia’s slow buildup across Ukraine’s eastern border during the last decade. And although Taiwan is not optimized for the defensive mission, its attack helicopters and warships are arguably better suited to counter Chinese amphibious forces than Ukraine’s military is against Russia’s precision missiles and high-end aircraft.

Yeah, go back to Maryland, you have stunk up D.C. enough. Why hasn’t the U.S supplied Ukraine with Drones?  They easily can take out Russian Tanks.