Megacities are becoming the norm; urbanites comprise 60% of the world population. Densities in many cities are such that inhumane conditions are commonplace. Diseases spread in seconds, police are afraid to police, governments are not able nor willing to contain suburban conflicts where the scum invades them with impunity, the law of the jungle prevails. 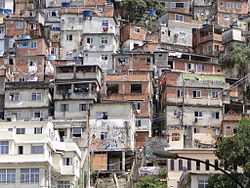 Urban gutters built on hillsides and landfills are becoming ubiquitous; think favelas. City dwellers without jobs live on pennies a day, rule of no law dictates the lives of those who have no future. Effectively these uninhabitable sewer pit swamps will dictate new ways by authorities to contain the human garbage; it won’t be easy as ecosystems are overrun; drug infested areas inhabited by zombies will force government to deal with new ways to contain the contagion. Expect policing policies to seek advanced technical solutions; robotic enforcers will be piloted by those who obtained their experience playing video games. Warfare by remote will be in real time.

CLICK HERE FOR THE VIDEO ON WHAT OUR AND YOUR FUTURE HOLDS.

72 thoughts on “HELL ON EARTH”