In the art of war, knowing your opponent’s weakness beforehand is half the battle.

“The greatest victory is that which requires no battle.” “Sun Tzu said: The art of war is of vital importance to the State.”
― Sun Tzu,

The Art of War “Attack him where he is unprepared, appear where you are not expected.”  “Whether in an advantageous position or a disadvantageous one, the opposite state should be always present to your mind.”
― Sun Tzu, The Art of War

These well known quotes from Sun Tzu’s “The Art of War” are not to be taken lightly. Not only are they  applicable in our daily lives, business and personal, but are most helpful to the saavy in preparation for war. We would not be surprised if President Trump has read Sun Tzu’s epic. Now that he is President the rendering of their principles when confronting our enemies is most important.

We live in perilous times; being attacked by a reckless child and belligerent strong. This is the result of the weakness shown by Trump’s predecessor. Weakness begets threats. From Russia, China, Iran and North Korea we are on the receiving end of daily provocations. We must be ready to counter them, to be prepared for engagement that obviously will come in due time.

Those who play with fire will eventually get burned. Diminutive dictators or wannabee psychological midgets will find themselves ten feet under if they keep up the inflammatory rhetoric. Case in point is the little man who heads North Korea. A boy with a man’s ego, small stick and loose tongue is a very dangerous combination. History has dealt with these kinds of mental midgets. Testing President Trump early in his administration is a very callous endeavor which ultimately will end in a mass funeral for the psycho of North Korea.

Turkey is another hot spot. Ruled by a wannabee dictator for life, Erdogan, who has not the slightest idea of an adversary’s strength, guile and purpose will face a devastating defeat. Although Turkey has recently reestablished diplomatic relations with Israel, they are still very fragile and subject to the whim of both parties. Erdogan has lashed out at one time or another at the PKK, the Kurds and Israel. Small men inevitably try to take the focus off themselves, blaming others for their failures,  they need a fall guy to raise their self esteem.

For Turkey, which is now in a depression, Erdogan finds the best way to place blame is to create a bogeyman. As he continues to support a Palestinian State (small chance in hell that will happen anytime soon) but not for Turkish autonomy spews reckless diatribe and inflammatory comments warning the Kurds, the PKK and particularly the United States for harboring Fethullah Gullen, a firebrand cleric living in Pennsylvania who Erdogan blames for a failed coup. Eventually these will come back to haunt him. 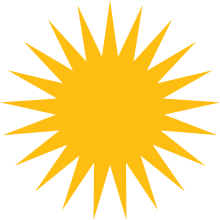 The future scenario is not pretty, much blood will be spilled.  Erdogan continues to light the fire of war, his enemies are preparing for the ultimate battle. The Kurds on one hand will take it to him from within. Israel is patiently waiting for another incident similar to the Mavi Marmara ; bringing the Turkish military into the conflict will obviously create an incident similar to the Gulf of Tonkin. The battle will be swift and victorious for Turkey’s enemies.

The United States will not back Turkey in case of conflict that is self provoked. Erdogan will remind us of NATO’s Article 5 of the North Atlantic treaty, requiring member states to come to the aid of any member state subject to an armed attack”, but this won’t happen. The Christian West will tell Turkey to fight their own battles. Turkey will be tossed from NATO. Turkey is a dictatorial state ruled by a Tyrant; free press has been stymied, political opposition is a few, 20,000 or more have been jailed since the failed coup. Erdogan is still focusing on  fake news circulating in his dinosaur sized head, little does he realize that there is a new man in town named TRUMP.

And for IRAN, Trump has stated that they will never have a nuclear weapon. This is a strong statement that will most likely be tested in the theater of war. The nuclear deal with Iran is a “total disaster.” We know it, Obama knew it. The table has been set by the Ayatollah’s, ballistic missiles have been launched by the rug merchants in violation of the nuclear agreement. This is of great concern in Israel and the United States. Israel’s Mossad, IDF and Shin Bet are on high alert. However, Israel is known to have many nuclear weapons, some are of the neutron type. But to nuke the Mullahs has risks. There are better ways than to launch a mushroom cloud over Tehran; for instance Israel can bunker bomb their nuclear facilities. Also launch triangular stealth drones to eviscerate the cancerous hierarchy committed to self destruction which is inevitable. Launching whole fleets of these offensive AI robots will bring the maniacal suicide bombers to their senses in quick fashion. For they will get their wish of death.

The map has been set, the time is close, be prepared for the Mother of all Battles.