READ BELOW:  THE UNITED STATES DOES NOT NEED  TO BE LECTURED ABOUT MORALS BY ANY MEXICAN OFFICIAL, NOT TODAY, NOT TOMORROW, NOT EVER.

Prior to the Spanish Conquistadors conquering Mexico the country was under the hegemony of the Aztec empire. The Aztec of Central Mexico built a tributary empire covering most of central Mexico. The Aztec were noted for practicing human sacrifice on a large scale. Along with this practice, they avoided killing enemies on the battlefield. Their warring casualty rate was far lower than that of their Spanish counterparts, whose principal objective was immediate slaughter during battle. This distinct Mesoamerican cultural tradition of human sacrifice ended with the Spanish conquest in the 16th century. Over the next centuries Mexican indigenous cultures were gradually subjected to Spanish colonial rule. One could say that the Spanish were ruthless killas.

The Spanish first learned of Mexico during the Juan de Grijalva expedition of 1518.  The Spanish conquest of the Aztec Empire began in February 1519 when Hernán Cortés arrived at the port in Veracruz with 500 conquistadores. After taking control of that city, he moved on to the Aztec capital. In his search for gold and other riches, Cortés decided to invade and conquer the Aztec empire. 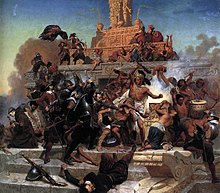 Storming of the Teocalli by Cortez and his troops. Emanuel Leutze. Painting, 1848

When the Spaniards arrived, the ruler of the Aztec empire was Moctezuma II, who was later killed. His successor and brother Cuitláhuac took control of the Aztec empire, but was among the first to fall from the first smallpox epidemic in the area a short time later. Unintentionally introduced by Spanish conquerors, among whom smallpox was endemic, the infectious disease ravaged Mesoamerica in the 1520s. It killed more than 3 million natives as they had no immunity. Other sources, however, mentioned that the death toll of the Aztecs might have reached 15 million (out of a population of less than 30 million) although such a high number conflicts with the 350,000 Aztecs who ruled an empire of 5 million or 10 million. Severely weakened, the Aztec empire was easily defeated by Cortés and his forces on his second return with the help of state of Tlaxcala whose population estimate was 300,000. The native population declined 80–90% by 1600 to 1–2.5 million. Any population estimate of pre-Columbian Mexico is bound to be a guess but 8–12 million is often suggested for the area encompassed by the modern nation.

The deaths caused by smallpox are believed to have triggered a rapid growth of Christianity in Mexico and the Americas. At first, the Aztecs believed the epidemic was a punishment from an angry god, but they later accepted their fate and no longer resisted the Spanish rule. Many of the surviving Aztecs believed that smallpox could be credited to the superiority of the Christian god, which resulted in their acceptance of Catholicism and yielding to the Spanish rule throughout Mexico.

The territory became part of the Spanish Empire under the name of New Spain. Mexico City was systematically rebuilt by Cortés following the Fall of Tenochtitlan in 1521. Much of the identity, traditions and architecture of Mexico developed during the 300-year colonial period. The capture of Tenochtitlan and refounding of Mexico City in 1521, marked the beginning of a 300-year-long colonial era during which Mexico was known as Nueva España (New Spain). The Kingdom of New Spain was created from the remnants of the Aztec hegemonic empire. Subsequent enlargements, such as the conquest of the Tarascan state, resulted in the creation of the Viceroyalty of New Spain in 1535. The Viceroyalty at its greatest extent included the territories of modern Mexico, Central America as far south as Costa Rica, and the western United States. The territorial evolution of Mexico after independence, noting the secession of Central America (purple), Chiapas annexed from Guatemala (blue), losses to the US (red, white and orange) and the reannexation of the Republic of Yucatan (red). 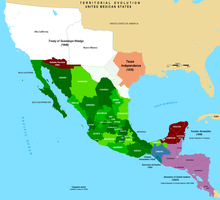 The indigenous population stabilized around one to one and a half million individuals in the 17th century from the most commonly accepted five to ten million pre-contact population. The population decline was primarily the result of communicable diseases (particularly small pox) introduced during the Columbian Exchange. During the three hundred years of the colonial era, Mexico received some 400,000 to half a million Europeans, 200,000 to 250,000 Africans and 40,000 to 120,000 Asians. The 18th century saw a great increase in the percentage of mestizos (The Penguin Atlas of World Population History.

Agustín de Iturbide became constitutional emperor of the First Mexican Empire in 1822. A revolt against him in 1823 established the United Mexican States. In 1824, a Republican Constitution was drafted and Guadalupe Victoria became the first president of the newly born country. In 1829 president Guerrero abolished slavery. The first decades of the post-independence period were marked by economic instability, which led to the Pastry War in 1836. There was constant strife between liberales, supporters of a federal form of government, and conservadores, who proposed a hierarchical form of government.

During this period, the frontier borderlands to the north became quite isolated from the government in Mexico City, and its monopolistic economic policies caused suffering. With limited trade, the people had difficulty meeting tax payments and resented the central government’s actions in collecting customs. Resentment built up from California to Texas. Both the mission system and the presidios had collapsed after the Spanish withdrew from the colony, causing great disruption especially in Alta California and New Mexico. The people in the borderlands had to raise local militias to protect themselves from hostile Native Americans. These areas developed in different directions from the center of the country.

Wanting to stabilize and develop the frontier, Mexico encouraged immigration into present-day Texas, as they were unable to persuade people from central Mexico to move into those areas. They allowed for religious freedom for the new settlers, who were primarily Protestant English speakers from the United States. Within several years, the Anglos far outnumbered the Tejano in the area. Itinerant traders traveled through the area, working by free market principles. The Tejano grew more separate from the government and due to its neglect, many supported the idea of independence and joined movements to that end, collaborating with the English-speaking Americans.

General Antonio López de Santa Anna, a centralist and two-time dictator, approved the Siete Leyes in 1836, a radical amendment that institutionalized the centralized form of government. When he suspended the 1824 Constitution, civil war spread across the country. Three new governments declared independence: the Republic of Texas, the Republic of the Rio Grande and the Republic of Yucatán. 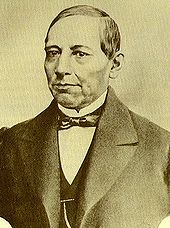 The 1846 United States annexation of the Republic of Texas and subsequent American military incursion into territory that was part of Coahuila (also claimed by Texas) instigated the Mexican–American War. The war was settled in 1848 via the Treaty of Guadalupe Hidalgo. Mexico was forced to give up more than one-third of its land to the U.S., including Alta California, Santa Fe de Nuevo México and the territory claimed by Texas. A much smaller transfer of territory in what is today southern Arizona and southwestern New Mexico—known as the Gadsden Purchase—occurred in 1854.

The Caste War of Yucatán, the Maya uprising that began in 1847, was one of the most successful modern Native American revolts. Maya rebels, or Cruzob, maintained relatively independent enclaves in the peninsula until the 1930s.

So it be that the HISTORY OF MEXICO is one of conquest and revolt. The Spanish were red blooded killers, guilty today of mass murder and plunder. Their philosophy of conquest seeks no end. They are intent on  Spanishizing the Estados Unidos. Until they conquer America their appetite will not be satisfied.

When Mexican President’s lectures us it is necessary to turn the tables on their Spanish Ancestor killing machine. Americans must and will stand up to this Spanish onslaught. The Latino/Hispanic mind knows no end, seeking to monopolize public opinion and blame White Americans for their lot in life. The European Caucasian is in no way responsible for their misery. Time to stand up and throw their violent colonial history back in their face.

BUILD THE WALL AND MAKE MEXICO PAY FOR IT. STOP THE ILLEGAL FROM ENTERING OUR GREAT COUNTRY 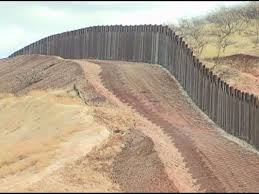 There is a similarity to the Spanish invasion and that of the growing Muslim population. Evan a blind man can see what they plan on accomplishing, a slow but territorial takeover of America. A warning to America, wake up now tomorrow may be too late.

Thank you Wikipedia for insightful history of Mexico who provided the bulk of the above information.

1,986 thoughts on “HISTORY OF MEXICO – THE SPANISH CONQUEST – A KILLING MACHINE”