This was not a surprise to those who fervently protested the long- awaited decision, as SCOTUS wraps up its term, regarding Roe v Wade, actually Dobbs v. Jackson. They knew in advance what awaited them; they were not blind sighted nor sucker-punched if you will in the 6-3 decision that declared Roe v Wade not to be the law of the land. Protests were rampant, at court houses, city venues and at the homes of the Justices, virulently protesting with a vengeance.

Ironically though, we must impartially add, that many of the protesters would not be here if their mother had an abortion. How stupid of them! 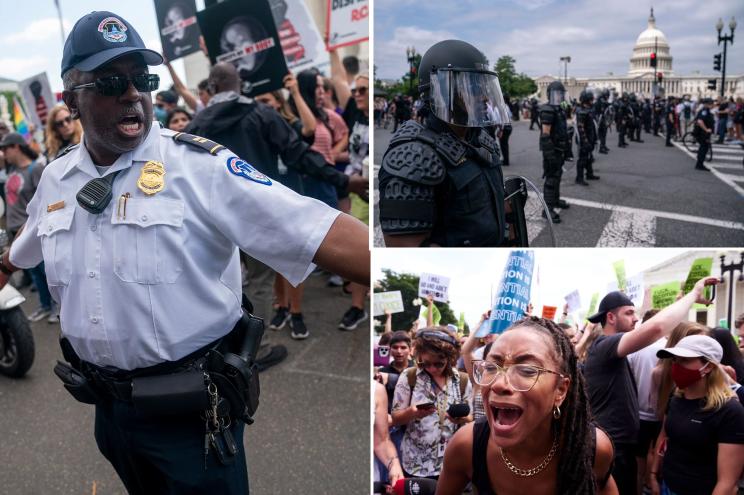 But now you have the New York maniac, UpChuck Schumer, going ballistic, raging like a bull when he heard the decision. The guy should be incarcerated, tried and convicted of Sedition for threatening the Justices.

Senate Majority Leader Charles E. Schumer blamed the U.S. Supreme Court decision overturning Roe vs. Wade on “MAGA Republicans,” who are “complicit in today’s decision and all of its consequences.”

But, the most revered Supreme Court Justice, RBG, has been thrown under the bus. Once a liberal Icon, is being castigated as the reason for the Roe defeat. “She was into herself, did not retire earlier, which would have allowed Obama to appoint another diehard, we make the law, liberal. How things have changed.

And they were out full force in the Lone Star State. Austin saw protesters GONE WILD. “ILLEGITIMATE DECISION”

A police officer in Cincinnati, Ohio told Fox News that a “solid 800” people showed up for a protest in the downtown area marching to a federal courthouse. (Credit: Andrew Mark Miller/Fox News Digital)

A police officer in Cincinnati, Ohio told Fox News that a “solid 800” people showed up for a protest in the downtown area marching to a federal courthouse.

The protesters are blocking Main Street and people are giving speeches following the Supreme Court’s reversal of Roe v. Wade on Friday.

“Reproductive justice for all,” one banner says.

STARE DECISIS – ONLY WHEN IT FITS THEM

One of the most famous examples of reversing a precedent is the case of Brown v. Board of Education, where the Supreme Court justices collectively ruled in a civil rights case against racial segregation in public schools, after deeming it unconstitutional. This ruling overturned the “separate but equal” precedent ruled in the Plessy v. Ferguson case of 1896, which said that racially segregated public facilities were legal, so long as the facilities for Black people and whites were equal.

The “Separate but equal” precedent stood for several decades until May 17, 1954, when it was abolished in the public education field, because segregated schools were inherently unequal and deprived the students of equal protection of the laws instituted by the 14th Amendment. This was after Oliver Brown filed a class-action suit in 1951, against the Board of Education of Topeka in Kansas, because his daughter, Linda Brown, was refused entry to Topeka’s all-white elementary schools.

This case and four others involving segregation in schools were combined into a single case named “Brown v. Board of Education” in 1952. This case is often referred to as a “super-precedent” because it ended the segregation of public schools in the United States and is unlikely to be overruled or overturned.