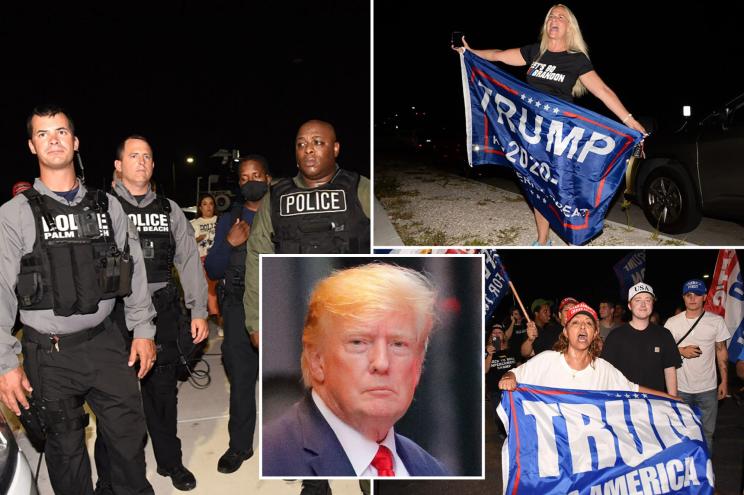 ‘Like the scene of a ‘Die Hard’ movie’: FBI raids Trump’s Mar-a-Lago, breaks into safe

The FBI raided Donald Trump’s Mar-a-Lago estate in Florida and broke into a safe in his palatial home, the former president confirmed Monday.

Trump said in a message on his social media forum Truth Social that his home had been “raided, and occupied” and was “currently under siege.”

FBI agents were reportedly searching for classified documents that Trump allegedly brought with him from the White House to Mar-a-Lago after his presidency ended — which, if true, could be a violation of federal law.

The National Archives and Records Administration said it had found classified material in 15 boxes at the residence earlier this year and alerted the FBI. The agents executed a search warrant Monday to look for additional presidential records Trump may have relocated to his Florida estate.

“Nothing like this has ever happened to a President of the United States before,” Trump wrote on Truth Social.

The FBI’s raid of former President Donald Trump’s Mar-a-Lago estate in Florida is a “sad night for America,” according to Trump’s longtime friend and former attorney Rudy Giuliani.

On Monday, the FBI broke into a safe in Trump’s palatial home and reportedly searched for classified documents he allegedly brought with him from the White House to Mar-a-Lago after his presidency ended — which, if true, could be a violation of federal law.

“It’s a very, very sad night for America, and for me personally, who has spent many years of my life in the justice department at the lowest and the highest levels and worked very closely with the FBI to put some of the worst criminals of the 20th century in jail,” Giuliani told host Rita Cosby.