Hillary Clinton stumbled onto a British Teletube talk show yesterday wearing a boot on her right foot. What happened? As one host called out Clinton for missing an interview, her spokesman initially said she “twisted her ankle.” He tweeted a picture of Clinton wearing a special boot during a separate appearance on the BBC’s “Graham Norton Show.”

But in that appearance, Clinton said she actually broke her toe — after apparently running down the stairs in heels and falling backward.

The status of Clinton’s foot was the subject of much speculation in the British media world all day. She had been slated for interviews with multiple British news programs, including BBC “Woman’s Hour” and ITV’s “This Morning.”

But according to a Snapchat from “This Morning” host Philip Schofield, Clinton cancelled. “Supposed to be interviewing Hillary Clinton…but she’s fallen over and hurt her foot!! Gutted,” Schofield posted to Snapchat, complete with a ‘crying face’ emoji and a picture of her book “What Happened” sitting by itself on a couch.

Once again a pattern emerges; Hillary Clinton has “the foot in the mouth disease.” Running down stairs with high heels! Who will ever believe such a story? 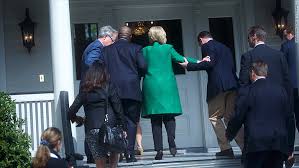 Click here for one more stumbling and most humiliating Hillary story. After all the lame excuses America knows Hillary’s problem is Hillary. By the way she is pushing the most deceitful, conceited book of all time in Britain because no one in America will fork over the money buy it. PATHETIC!

As it was on the  night of November 8, 2016, Hillary Clinton has fallen flat on her face.

Please call in the clowns.  LOCK HER UP – JAIL THE BIRD

We know a rat when we seen one. If it smells like a rat, looks like a rat, squeals like a rat, it must be a rat; a big fat one indeed. So now the book tour starts in earnest as Hillary tells her side of the most biased reasons why she got beat bad. Yeah sure she got the popular vote with the help of 3 plus million illegals and then some.

Think about the run-up to the general election, the Clinton campaign was hard at work in determining which candidate would be the most competitive. Was it Jeb Bush, Ted Cruz, Carly Fiorina or Scott Walker? Donald Trump was not even on their radar. Their thinking was that Trump was a joke, a buffoon, a cartoon character, who if he was to be the nominee Hillary would have no trouble pulverizing him to smithereens  in a head to head match up. Wrong?

Little did their brain trust realize that a self inspection was in order; for Hillary was not liked, she was a liar, could not be trusted and all the rest. But most of all Hillary was a killer, having killed Ted Stevens in Benghazi and the three brave men who guarded the embassy. Don’t forget the description of the embassy by the Clinton team; it was no embassy, just an outpost – they tried to belittle it and by doing that that would mitigate the protection that was on order.

Hillary skirted the arrest of the justice department because of the insiders and outsiders (Comey-Lynch) who protected her. If she won it would be business as usual.  We have not seen justice prevail. Time for the Sessions’s Justice Department to bring in the big guns.

Yesterday Clinton stopped at the Danbury, Ct Costco for a book signing. Very confusing why she wood stop in a Republican enclave. A smattering of protesters with “Hillary for Prison” signs and “Make American Great Again” were relegated to a street corner across from the store, where they blamed Clinton for the deaths of the four Americans in the 2012 Benghazi attack. With all narcissists there is a common thread; they believe that their faults are few and in between. They blame others, never to accept blame; truth to them is what they believe which is “they are a legend in their own mind.”

America has had enough of this Murderer. Lock her up for good.