Expect the unexpected! The world is full of those who SHOOT OFF with the mouth never to face the consequences. Yes we are talking about the Boyman goon of North Korea. For some reason the hair up his ass has triggered a high degree of animosity toward the United States; after all we have given him?. (sorry about the detailed description). Like a mad dog, foam urinates between his lips.

He will find out the answer to his prayers in short order. It will come when least expected, in the dark of night a dream come true will shutter his bunker bed.  An all spectrum suntan lotion will be no match for the blazing fireball of energy expected to vaporize KIM. The show of force not seen for seven decades will turn him and his phalanx into dust.

Previous administrations have thought best to give more and more sweeter candy to North Korean egomaniacs, grandfather, father and now son. Their succor has resulted in more hostility, bringing us to the Mother of all confrontations.

Back in 1994, President Clinton prepared to confront North Korea over CIA reports it had built nuclear warheads and its subsequent threats to engulf Japan and South Korea in “a sea of fire.”

Enter self-appointed peacemaker Carter: The ex-prez scurried off to Pyongyang and negotiated a sellout deal that gave North Korea two new reactors and $5 billion in aid in return for a promise to quit seeking nukes. Way to go Jimmie!

Clinton embraced this appeasement as achieving “an end to the threat of nuclear proliferation on the Korean Peninsula” — with compliance verified by international inspectors. Carter wound up winning the Nobel Peace Prize for his dubious efforts. Sounds like Obama!

But in 2002, the North Koreans ’fessed up: They’d begun violating the accord on Day One. Four years later, Pyongyang detonated its first nuke.

Now, the Obama administration (long content to kick the North Korea can down the road) says it will never “accept” a nuclear North Korea. Funny: The president said the same thing about Iran, then cut a deal that guarantees the ayatollahs go atomic.

MOAB upon MOAB will rain down on this impotent dictator come lately, finding that his pants turn yellow in a flash. There will be nowhere to hide. “Hands up don’t shoot” is not in the Jong Un lexicon.

In a series of tweets, President Trump threatened to halt all trade with countries doing business with the North, a veiled warning to China, and faulted South Korea for what he called “talk of appeasement.”

At this point in time “Mad Dog” Mattis is preparing for the worst, defensively and offensively. The reaction by us will most likely be offensive because to expect KIM to crater to our demands  is not on in his playbook. However, Trump is not a Jimmy Carter, expect him to put the clamps on trade with China and India too. This will certainly get their attention very quickly.

There is no time to waste here, there is a danger in patience. Lives are at stake, acting fast to prevent the ultimate calamity is a virtue. Are we to wait until a fireball erupts in South Korea, Guam, Hawaii or the Mainland?

The words of Barry Goldwater, “I would remind you that extremism in the defense of liberty is no vice! And let me remind you also that moderation in the pursuit of justice is no virtue.”

A pair of US supersonic bombers have flown over the Korean Peninsula, less than 48-hours after North Korea’s successfullytested an intercontinental ballistic missile (ICBM).The warplanes were joined by fighters from both South Korea and Japan.

UNITED STATES AND CHINA are on the BRINK OF WAR. The theater is set, the action will be harsh and quick, devastating as devastating can be. North Korea will suffer to no-end, a lightning attack Israeli style, over in a matter of minutes. All military installations will be imploded in a nuclear minute. The Boy-ruler will run for cover, no doubt to an ICBM silo, that too will face the MOAB.

he North Korean leader, Kim Jong-un, has issued a fresh challenge to Donald Trump by conducting a second ballistic missile test-launch which experts said placed US cities in range of potential attack. The missile launch was meant as a “stern warning” for the US, North Korea’s state news agency said.

Experts say the US president had hoped to form a “big marriage” with China, which would have seen the world’s top two economies tackle Pyongyang together, with Beijing putting economic pressure on its ally.

However the Chinese president, Xi Jinping, fearing the impact the collapse of Kim’s regime would have on China, has appeared unwilling to enter into such a partnership. Following North Korea’s ICBM test in early July, Beijing rejected Trump’s calls for it to do more, claiming the “China responsibility theory” had to stop.

There is only one remaining question to be answered, will China counter the United States to help North Korea repel the ally attack?

When it comes to lip service put China at the head of the class. We have observed their expertise for decades, they have perfected the ins and outs at playing the shell game; also known as 3 card monte. They have run with it ever since the first DVD was pirated. Always agreeing to prevent copyright and trademark violations while producing millions upon millions of knock-offs. When confronted with penalties they parse words, but it never stops.

In fact the seizures seen on TV are a public relations gimmick. Most of the pirated stuff is sold through various internet channels; it is impossible to stop them, let alone shut down their manufacturing operations. Moving at night from one factory to another is how the game is played. Look there and it is gone, a whack a mole operation for sure. However, to be more serious they have leveraged their know-how into the more dangerous political arena.

North Korea has become front and center. The boy dictator, the one with the zipp-do0, has followed in the footsteps of his father and grandfather. Both of them sucked the G-7 dry with promises of everlasting peace. You see how far appeasement has gotten them. Sweet deals for the one man mega maniac is like taking chocolate from a baby; this only emboldens them more. We can go on and on, but what is the use? For now is the time to put up or shut up. The ball is in China’s corner. Don’t be shocked if they sit on their hands and watch Trump sweat bullets, only to find out that he will not bluff.

The message sent to Assad is only a primer – expect North Korea to receive a more fatal blow. Trump is patiently assessing the situation while waiting for the next provocation and it will surely come. What we don’t know is when and where. Expect a wayward missile to hit dry land, maybe South Korea. This will set off a chain reaction – the keys to the response are many fold. Will the United States take out the Boy Wonder’s capability in on fell swoop, will there be an invasion, will conventional weapons enter the fray.

At this point the Commander in Chief’s plans are top secret, but the Syrian operation gives us a sign of things to come. Although the dynamics of war constantly change, the North Korean theater will be swift and resolute. The Trump MOAB hit on Syria was a wake-up call for those who instigate war. We would not be a bit surprised to see twenty Mother of All Bombs dumped on the boy buffoon.

Oh China, they will watch the fireworks display from afar. Trump knows the shell game all too well, seen it played many times on the streets of New York. You bet he is ready willing and able to shut down the Chinese operation. 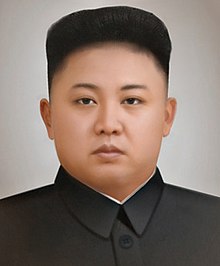