The question is this. Back when the Constitution was written just about everyone in the United States was a citizen; well except the Native Americans. We doubt that they were counted, a great many of them lived in the West and South; areas which did not become states until later on.

So we pose a salient question! What would the Founding Fathers have said if say, Virginia brought in two million Englishmen for a one year visit in 1790? Would they be counted in the Census? We doubt it.

Or what would the powers in charge say if two million Quebecois strolled down from the North landing in Massachusetts due to an invite? The possibility of them being counted is highly unlikely.

In today’s very volatile theater the Supreme Court must weigh in on the counting of illegals who flood states like the Sanctuary State of California, thereby garnering them a higher portion of representation that would ordinarily not happen.

Counting of ILLEGALS IS ILLEGAL – THE SUPREME COURT HAS TO PUT A STOP TO IT.

The United States Census is a decennial census mandated by Article I, Section 2 of the United States Constitution, which states: “Representatives and direct Taxes shall be apportioned among the several States … according to their respective Numbers .

The first census after the American Revolution was taken in 1790, under Secretary of State Thomas Jefferson; there have been 22 federal censuses since that time. The current national census was held in 2010; the next census is scheduled for 2020 and will be largely conducted using the Internet. For years between the decennial censuses, the Census Bureau issues estimates made using surveys and statistical models, in particular, the American Community Survey.

(CNN)It sounds like a small change, in a survey many people forget about minutes after they take it.

But the Trump administration’s plan to put a citizenship question back on the US census is a big deal.
Even if talk about polls and statistics usually makes your eyes glaze over, here’s why you should pay attention:
The census isn’t just an academic exercise. It’s the basis for deciding the number of representatives each state gets in Congress and how billions of dollars in federal funds are distributed.
Monday’s announcement by the Commerce Department marked the beginning of what’s likely to be a lengthy battle in the political arena and in court. California has already filed a legal challenge, and other states and civil rights groups have also threatened to sue.
Here’s a look at the issues at play — and what’s at stake:

Why is this coming up now?

The Justice Department asked officials to add the citizenship question, saying it needed better data on the voting age population to help enforce the Voting Rights Act. In a memo Monday, Secretary of Commerce Wilbur Ross, whose department runs the census, said he was granting the Justice Department’s request.
Supporters say this is a common-sense question that simply makes sense to ask.
Critics argue that the Justice Department has other ways to get citizenship data without interfering with the census. They say the change is a political decision aimed at shifting the balance of power — and that it’s no coincidence administration officials made the push to add a question that runs the risk of significantly undercounting immigrant, minority and low-income populations.

What exactly are critics concerned about?

Advocates fear that when undocumented immigrants or people in immigrant families receive the census form in the mail, the citizenship question will stop them from completing and returning it.
Immigrant rights groups say this couldn’t come at a worse time, as many in immigrant communities are already losing trust in officials and afraid to answer their doors.
“In the past, the census would always make a big effort to tell people that they don’t share their information with other government agencies. I think that’s something people will not take too seriously this time,” said William Frey, a demographer and senior fellow at the Brookings Institution. 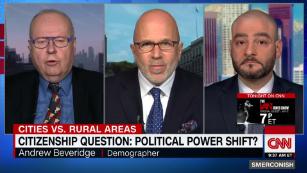 Who is the census supposed to count?

The decennial census is supposed to count everyone who lives in the United States, whether or not they are citizens.
That data is used to calculate all sorts of things, including the number of representatives each state gets in Congress, the number of votes each state gets in the Electoral College and the amount of federal funding local governments get for programs like Medicaid, Head Start and the National School Lunch Program.

The 2020 census is still years away. And it’s too soon to say for certain how things will play out.
But if response rates drop significantly, some states could find themselves losing a House seat or federal funding. 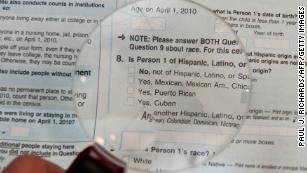 Blue states are far more likely to lose money and power over Census citizenship question
States with large immigrant populations like Texas, California, Florida, New Jersey, New York and Illinois could be affected, Frey said.
But it’s important to note that population trends have shifted in recent years beyond these traditional gateways. Significant growth in immigrant populations has occurred largely in the Southeast, from small towns in rural communities to bigger cities like Charlotte, North Carolina, and Atlanta.
States like Georgia and North Carolina could see an impact, too, Frey said.

What are the political implications of this?

Even before the Commerce Department’s announcement, the 2020 census was becoming a political flashpoint.
President Trump’s re-election campaign sent an email to supporters last week, endorsing the idea of adding a citizenship question and slamming opponents of the move.
“The President wants the 2020 United States census to ask people whether or not they are citizens. In another era, this would be COMMON SENSE … but 19 attorneys general said they will fight the President if he dares to ask people if they are citizens. The President wants to know if you’re on his side,” the email said.
Democratic lawmakers fired back on Tuesday, slamming the administration.
“Trump is worried about losing power so he’s trying to take ours away,” California Rep. Lucille Roybal-Allard said on Twitter.

Hasn’t this question been on the census before?

Yes, but not since 1950.
For years, however, it has appeared on the American Community Survey, an ongoing sample survey conducted by the Census Bureau.
It’s no surprise to see census questions shifting with the times, said Margo J. Anderson, a professor of history at the University of Wisconsin, Milwaukee.
“It was a big deal to ask if someone had a radio in 1930. In 1940, not so much,” she said.
Citizenship questions were regularly on the census until 1950. In 1960, they were removed from the list.
“Lots of questions go off the census when they’re not very important anymore,” Anderson said. “In 1960, we had essentially had very low levels of immigration for 30-35 years. … There weren’t very many new immigrants coming. When you started collecting the data, there wasn’t much to find out.”
A citizenship question reappeared in 1970 on the long-form questionnaire sent to a sample of households at the time.
“We passed major new immigration legislation in 1965, and so the question became relevant again,” Anderson said.
It remained on subsequent long-form questionnaires until they were discontinued after 2000. It became part of the American Community Survey, which the Census Bureau began using to collect more detailed household data in 2005.

So is this a done deal?

California sues over Census citizenship question
The state of California immediately challenged the plan, filing a lawsuit in federal court on Tuesday. Former Obama administration Attorney General Eric Holder also blasted the move and said his organization, which focuses on voting enfranchisement and redistricting, would also pursue litigation against what he called an “irresponsible decision.”
And some Democratic lawmakers are also trying to block the move in Congress.
This much is clear: With immigration increasingly a political flashpoint and midterm elections looming, debate about this controversial census question is just beginning.