“Wanted Dead or Alive” by the world at large, sans China, Vlad is one step away of being assassinated or committing suicide. Things have not gone well for the Murderer of Children. The Invasion of Ukraine has not gone as planned. Defense department heads are either rolling or collectively, disappeared or killed on the front. What sets this invasion apart is the ill planning and ill forecasting by, not only the Russian Generals, but by those “talking heads” at large, who failed to recognize the extent of Vlad’s commitment to invade. 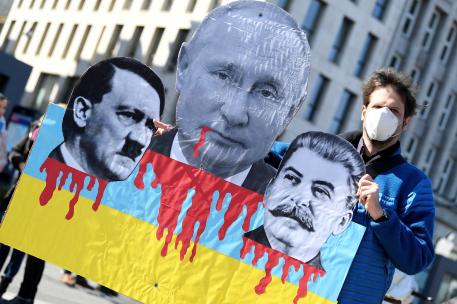 Stalin zeroed in on Red Army generals. Putin has replaced at least eight generals and the signs are that he is only just getting going. Sergei Shoigu, the defense minister and once a trusted hunting companion, has largely disappeared from view. Some say he co-planned the latest invasion with senior FSB generals rather than the army top brass, hence the breakdown in logistics, the lack of preparation, the confusion about the real aim of the war. So FSB officers have been placed under house arrest. The securocrats who kept Putin in power are being set up as his scapegoats.

Turning to Biden, we mean Branden, what has this Invalid done lately? Let us count the ways. Lied, lied and lied again. Does he have any idea where he is going or for that matter, what is coming out of his mouth? The world wants to know what is wrong with him.

His corner handlers are mystified too.  His communication director Psaki can’t keep up with the translations of his Mis-speak. Soon they will be running out of bandages to cover the wounds.

There are calls for his head to roll for giving succor to the enemy. What mattered most and what will be remembered for a long time was a single line the president of the United States said about the president of Russia: “For God’s sake, this man cannot remain in power.”  Yes, Biden has divulged State Secrets. This is a treasonous offense. The question remains; is it punishable by injection, Russians are good at this, or a “lightning strike”.