Rubbing salt in the wound is a metaphor that typifies a situation where a protagonist doubles up by criticizing a target; been going on for years.  The verbal salt assault ramps up pain to such a degree that the receiver can no longer take the scorn; they then lash out, but to no avail. In the case we are alluding to is the new tax law signed by President Trump in December 2017.

SALT is an acronym for State and Local Taxes. According to the new law, State and Local tax deduction limits are set at $10,000 combined when itemizing vs the new standard deduction of $12,000 for singles and $24,000 for marrieds.

The Tax Cuts and Jobs Act (TCJA) limited the ability of taxpayers to deduct state and local taxes (SALT) from their federal taxable income. New York Governor Andrew Cuomo called it an act of war and California Senate Leader Kevin de Leon inveighed against a “tax scam [that] disproportionately harms California taxpayers.”  PLEASE DON’T CRY FOR ME ARGENTINA!  SALT hurts these progressive maniacs to such a degree that they have to lash out at the President, but IT IS OK FOR THEM TO TAX THE LIVING SHIT OUT OF THEIR TAXPAYERS.  A BUNCH OF HYPOCRITICAL TWO FACED CRIMINALS.

Unlike prior tax cuts or reform, the Tax Cuts and Jobs Act of 2017 ends the longstanding practice of the federal tax code subsidizing high state and local taxes (known as SALT in tax code jargon). Instead of mostly well-off taxpayers being able to take an unlimited deduction for the state and local taxes they pay, the new tax law limits the deduction to $10,000 per family. This operates as if all 50 states changed their tax code all at once, because, unlike typical federal tax code changes, this reform doesn’t treat all states the same.

So what are these progressive malcontents doing about it? They are seeking a work around. How, you say, does that work? In their scheme (they are always scheming) they plan on allowing their taxpaying citizens to donate to a sham charity, set up by the individual state, the amount of SALT taxes due. This the will be treated as a charitable donation for Federal Income Tax. Not so fast says Uncle Sam. You can’t do that, but a valiant try nonetheless. We give them an A for tenacity, but an F for being Jerks.

According to the United States Census Bureau Supplemental Poverty Measure, California has the highest poverty rate in the country. One in five people in California are living in poverty and the state’s residents account for 33% of all those on welfare in the United States, despite the state only being 12% of the country’s population. The state spent $958 billion on welfare programs between 1992-2015. According to the study, 60% of Californians are jobless and living in poverty.

One contributing factor to their high poverty levels is their lack of affordable housing. Housing in California has become increasingly out of reach for the middle class due to building regulations and space constraints. This has caused housing to consume far more of the average residents income than in other parts of the country, leaving them with less money for food, transportation, healthcare and other services.

California’s politicians are hell bent on reversing the history of the golden state. The Pols are on the verge of tapping the gold of its citizens; many of them are visibly upset, particularly the Democrats. As we approach election season once again their constituents don’t find themselves too happy about being gang raped – the thinking is that they will take out their anger on the incumbent, ala Eric Cantor.

What gets them upset is Cap ‘n Trade, California’s boogeyman. Democrats whose beliefs are set in stone, think Marxism – tax the productive and transfer the wealth to the parasitic moocher are in a very precarious position. An extra $25 per week for a movie mogul doesn’t register, but to a gardener $25 can make a huge difference in life style.

Is it possible that the Green Agenda will be frozen for the forseeable future? Once the bees nest is aroused many are bitten. And soon inflation will be raising its ugly head, with pay flat, many of the middle class will call for a revolt. We like that kind of scenario. As the old saying goes, how do you turn a liberal into a conservative? Mug ‘m.

“WE ARE TO BLAME” Low life Muslim leader from CAIR says we are to blame for these attacks. In a Friday CNN interview, Hussam Ayloush, of the group’s Los Angeles chapter, said American foreign policy has helped fuel the rage that drives Muslim radicals to kill in the name of their faith.

Americans should be vigilant to the Muslim onslaught of conversion by force. “Convert or die” is their motto. They have brainwashed large swaths of populations that human salvation is by the way of Allah. This is not a religion but a political philosophy of conquest. Freedom is a foreign concept to the Koran. Beating of women, rape and killings are their means of enforcement. Those who are converted have no way out; they are frightened to tell the truth. One may ask why do they pray five times a day, once is not enough? America, we are now in a war. Our President is one of them.

As Obama will have you believe, this is a “going postal” carnage, however these are Islamic/Muslim terrorists who has been radicalized, like a cancer switch turned on. These two Jihadists are in the same camp as the murder Islamic killer at Fort Hood.

Remembering the Fort Hood tragedy was characterized by Obama as “work place violence.” Obama will not mention Islamic Terrorists, it is not in his descriptive jargon. One may ask why, but the answer is simple, “Obama is one of them.”

Federal investigators believe there is a “very serious” possibility that Tashfeen Malik, one of two shooters who murdered 14 people and wounded 21 others in San Bernardino, Calif. Wednesday, radicalized her husband and co-assailant, county restaurant inspector Syed Farook, Fox News has learned.

The scene in San Bernardino was described as chaos, Two Muslim terrorists, well armed, shot dead at point blank range 14 unarmed physically challenged individuals. An unprovoked attack by Islamic extremists, one at least who made a trip to Saudi Arabia, possibly a radicalized lone wolf, who took their anger out on the defenseless. The best definition of the perpetrators are “savages”.  CAIR has condemned the attack; this is an expected reply, a PR ploy in name only, to protect the guilty.

An eyewitness at the Inland Regional Center, where 14 were killed and 17 wounded, told police he saw a man leaving a meeting of county health department employees Wednesday morning, looking nervous. Police officers named Syed Farook as that man in their radio communications. At approximately 11 a.m., two people entered the center and opened fire. According to authorities the on-going investigation is in the preliminary stage; being fluid it will take time for the details to come out.

ISLAMIC State graffiti has appeared in a European city as sympathisers of the group claim “the caliphate is here”.

The terror group’s logo was daubed on the wall of a restaurant in Gothenburg, Sweden.

Chilling messages such as “convert or die” and “the caliphate is here” were also found covering the outside of Markus Samuelsson’s bakery.

“I felt a sudden chill down my spine. It’s terribly painful, we feel threatened,” Samuelsson said. 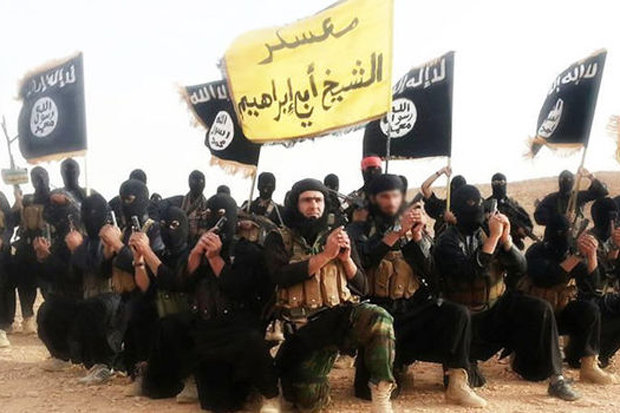 FEAR: Jihadis are targeting Christians in Sweden – like they did in Iraq

Since 1964 trillions of dollars have been spent to try to even the education gap. And every year the educator elites ask for more. However, the latest news from (click here)California is very disheartening. Blacks and Latinos have fallen farther behind Whites and Asians. In that subject, 69% of Asian students achieved the state targets compared to 49% of whites, 21% of Latinos and 16% of blacks. Two things stand out, one is that money does not solve all problems and two, the education industry has been misleading the taxpayers for four decades. The time has come to stop the charade and admit the truth.

As in the iconic film “Chinatown” the environmentalists of today are discharging millions of gallons of water into San Francisco Bay in an accommodation to the Greens. Additionally, the farmers are swallowing water like there is no tomorrow. Governor Browns explains this by insinuating that if water use is curtailed to the corporate farm our food bill will take a significant hit.

However, Governor Moon Beam has a very slim understanding of the power of economics; substitution will overcome any price rises; by the way who needs a $5 head of lettuce? And we may add that under today’s allocation of water resources 600 gallons of water are needed to produce a pound of almonds – California produces 90% of the worlds almonds and its millionaire farmers make $5,000 per acre. In a “nutshell” the rich are getting richer at the expense of families who have little to drink other than the tears flowing from their eyes.

Desalination plants are the answer to the current drought, but with Green lobbyists roaming the streets of the state, new plants are seen as a distant mirage. And we may add in closing, from the last we heard California has been a desert environment for millions of years so what is the big deal. A gerbil once known simply as “desert rats” are adapted to arid habitats. As is often the case when man tries to overcome a harsh environment unintended consequences occur; for example the current thirst for water by many different stake holders,  each with a different thirst. We will drink to that.

Dianne Feinstein: “All vets are mentally ill in some way and government should prevent them from owning firearms.”
Quote of the Day from the Los Angeles Times:
“Frankly, I don’t know what it is about California, but we seem to have a strange urge to elect really obnoxious women to high office. I’m not bragging, you understand, but no other state, including Maine, even comes close. When it comes to sending left-wing dingbats to Washington, we’re Number One. There’s no getting around the fact that the last time anyone saw the likes of Barbara Boxer, Dianne Feinstein, Maxine Waters, and Nancy Pelosi, they were stirring a cauldron when the curtain went up on ‘ Macbeth ‘. The four of them are like jackasses who happen to possess the gift of blab. You don’t know if you should condemn them for their stupidity or simply marvel at their ability to form words.”
Columnist Burt Prelutsky,
Los Angeles Times

During Thursday night’s California gubernatorial debate against Republican Neel Kashkari, California Governor Jerry Brown (D) revealed that nearly 30% of the state’s schoolchildren are either illegal immigrants or do not speak English.

According to The New York Times, 28% of Californians were born outside the United States in 2012 and, according to Pew Research, “Latinos make up nearly 40% of the state’s population and have made California ‘only the second state, behind New Mexico, where whites are not the majority and Latinos are the plurality.'”